Donald Trump speaks with president of Taiwan, country US broke ties with in 1979 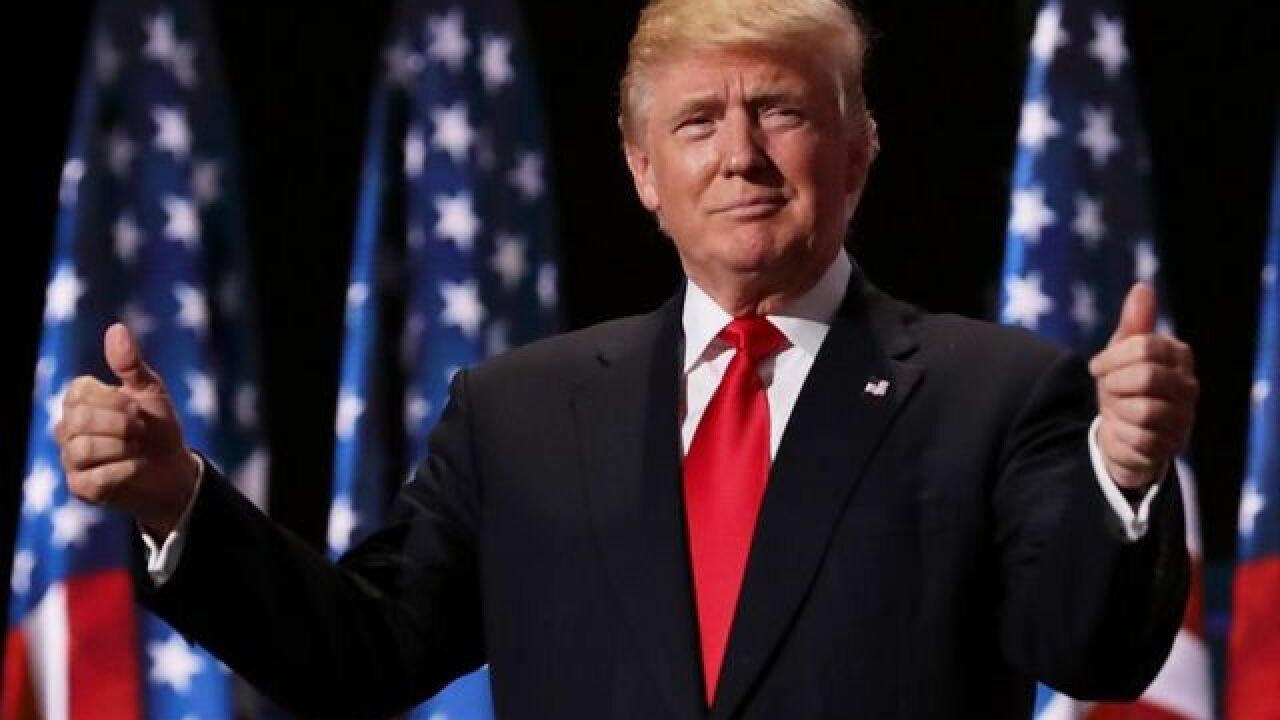 (CNN) -- President-elect Donald Trump spoke with the President of Taiwan Friday, according to a statement from his transition team, in a move that threatens to trigger a diplomatic showdown with China.

Trump's conversation marks the first publicly reported call between a US President or President-elect and the leader of Taiwan since Washington established diplomatic relations with Beijing in 1979, said Bonnie Glaser, a China expert at the Center for Strategic and International Studies.

The telephone call is certain to incense China, which considers Taiwan a renegade province. It is the first major sign of the unpredictability that Trump has vowed to bring to long-held US relations with the rest of the world.

The call, first reported by the Financial Times, risks throwing US-China relations into a tailspin before Trump takes the oath of office on January 20. China's state-run CCTV quickly issued a statement saying Trump made "an unprecedented break with the One-China Policy and accepted US-Mainland protocol."

"There is no immediate reaction from the Chinese government to this call," the statement continued. "The Mainland says it firmly opposes official contact in any form between Washington and Taipei."

Ned Price, a spokesman for the US National Security Council, said "there is no change to our longstanding policy on cross-Strait issues."

"We remain firmly committed to our 'one China' policy based on the three Joint Communiques and the Taiwan Relations Act," he said. "Our fundamental interest is in peaceful and stable cross-Strait relations."

A different Obama administration official said there was no contact with either the White House nor the State Department about the call beforehand.

Stephen Yates, a fellow at the Heritage Foundation who is an adviser to Trump's transition, is in Taiwan and helped facilitate the call, according to a source familiar with the visit. Yates was an Asia adviser to former Vice President Dick Cheney and is very supportive of Taiwan.

"This could be damaging," said Barry Pavel, director of the Brent Scowcroft Center on International Security at the Atlantic Council. "We'll see the Chinese reaction in several hours. I don't expect it to be pretty."

The danger, Pavel said, is that "the Chinese are going to think it was deliberate and that this is the beginning of a hostile policy by the Trump administration, upending the basic geometry of diplomatic relations between the US and China since 1979."

The President-elect vowed in his election campaign to take a tough line toward Beijing. He vowed to brand it a currency manipulator and warned the Asian giant is committing "rape" against American workers with its trade policy.

It was not immediately clear whether Trump's move in talking to Tsai was a deliberate shot across China's bows, or whether it was a product of his and his team's inexperience in foreign policy.

Glaser, the Asia expert at CSIS, said that the President-elect's call would worry China, but won't necessarily convince Beijing that it was impossible to have a functioning relationship with the Trump administration.

"I do think that the Chinese will be worried and they will first of all make some public statement," Glaser said.

"They will remind the US that obligations are to have an unofficial relationship with Taiwan," Glaser continued. "In private, I expect a little bit of a sharper message that they will deliver to the Trump team."

US relations with Taiwan and China are governed by a set of protocols known as the One China Policy. The United States acknowledged China's claim that there is one China and that Taiwan is part of China in a joint communique signed in 1979 at the time of the formal establishment of relations between Washington and Beijing.

Chris Murphy, a Connecticut Democrat who sits on the Senate Foreign Relations committee, publicly blasted Trump for the move in a series of tweets. While it will soon be Trump's right to shift policy, alliances and strategy, Murphy said "what has happened in the last 48 hours is not a shift. These are major pivots in foreign policy w/out any plan. That's how wars start."

He added that "if they aren't pivots - just radical temporary deviations - allies will walk if they have no clue what we stand for. Just as bad."

"And if they aren't pivots," Murphy continued, "just radical temporary deviations - allies will walk if they have no clue what we stand for. Just as bad."

Michael Green, who served as President George W. Bush's special assistant for national security affairs, said that while Trump's call was a huge breach in protocol, the idea of closer ties with Taiwan is not unprecedented. He expects things will normalize, but not before some stormy seas.

"The Chinese will go ballistic," Green said. "They will have to, and they will warn the US publicly and will find ways to warn them privately, about this."

Richard Bush, the former managing director of the American Institute in Taiwan, which is the official channel of US interests on the island, said the call is a significant development. But he said it isn't "technically" a breach of the unofficial status of Washington-Taipei relations because Trump isn't yet in the White House.

"China has a couple of options here," he said. "It could choose to be unhappy about this, but not make it a big issue. The other way they could see it is the first step in a kind of probe towards moving towards an official relationship."

He added: China "might calculate that it is better to react vigorously and strongly with the first step rather than wait for the situation to get worse."

Mike Pillsbury, a China adviser to Trump during the campaign who served under Presidents Ronald Reagan, George W. Bush and Obama, suggested people were over-reacting. He said Trump's call is like many of the dozens he has made and taken since Election Day with world leaders.

"It shouldn't be seen as a departure from norms," Pillsbury said. "We should have warmer ties with Taiwan. And it can be done without alienating Beijing. Indeed over the last decade, Taipei has pursued closer relations with the mainland. We too can do both. The zero sum mentality is an old way of thinking."

But Pavel, of the Atlantic Council, said that Trump isn't even president yet and therefore shouldn't make new policy.

"We can only have one president at a time," Pavel said.

And if Trump's move was deliberate, it should have been preceded by other policy measures to prepare the ground.

It's not the first time a Trump call to a foreign leader has raised eyebrows. Indeed, Murphy told CNN that his tweets referred not just to Trump's Taiwan call, but also to an invitation to visit the US that Trump extended to Rodrigo Duterte, the controversial president of the Philippines, along with communication with Pakistan.

On Wednesday, Trump called Pakistani Prime Minister Nawaz Sharif. According to the Prime Minister's office, Trump told Sharif that he is a "terrific guy," that his country is "amazing with tremendous opportunities," and that he would "love" to come to Sharif's "fantastic country" for a visit.

That would mark the first presidential visit to Pakistan in more than a decade. Previous presidents have withheld such a gesture in part because of security concerns, but also due to tensions between the two countries. The US has expressed repeated concerns over Pakistan's support for militants along the border with Afghanistan. Relations became even chillier after the discovery that Osama bin Laden had been hiding in northeastern Pakistan and, later that year, Islamabad shut off NATO supply routes to Afghanistan.

In that call, Trump also apparently told the Pakistani leader that he is "ready and willing to play any role that you want me to play to address and find solutions to the outstanding problems."

Southeast Asia experts and political analysts expressed concern that India would interpret that as an attempt to mediate India's dispute with Pakistan.

"Our relationship with Pakistan is one of the most sensitive and difficult relationships in the world," CNN political analyst David Gergen said about the call with Sharif. Usually, a president would make that call with aides and national security advisers nearby, Gergen said.

"You'd carefully think through any call like that, you'd make your two or three points, [then] over and out," he said. "Especially don't leave them in a position where they could put out something so gushing that it hurts your relationship with India."

Sadanande Dhume, a scholar at the American Enterprise Institute, said that in India, "as in many parts of Asia, people are very unsettled by a sense of uncertainty" about the Trump presidency. But he added that policy makers in Delhi "are taking that phone call with Nawaz Sharif neither seriously or literally, so talk of this potentially derailing India US relations are premature."

"People are talking about that call," he said, "but basically it's a party joke. It's entertainment. It's unbelievable. No one doubts Trump really said it."