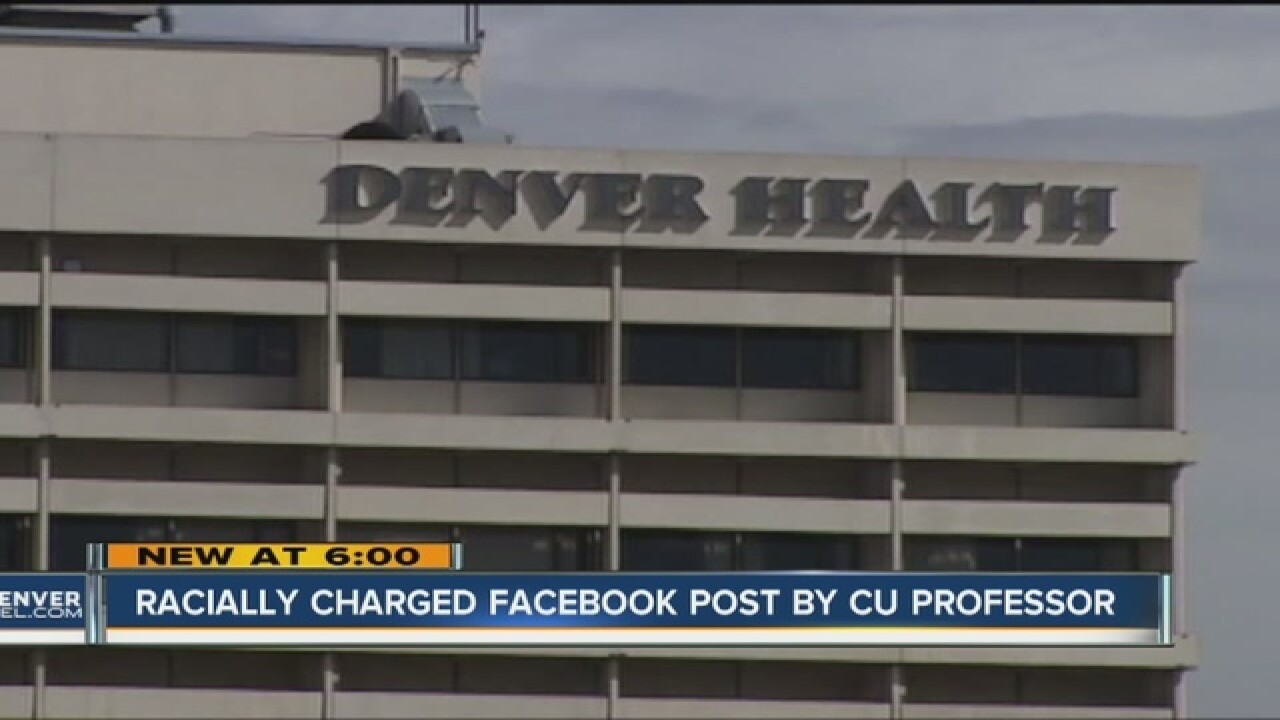 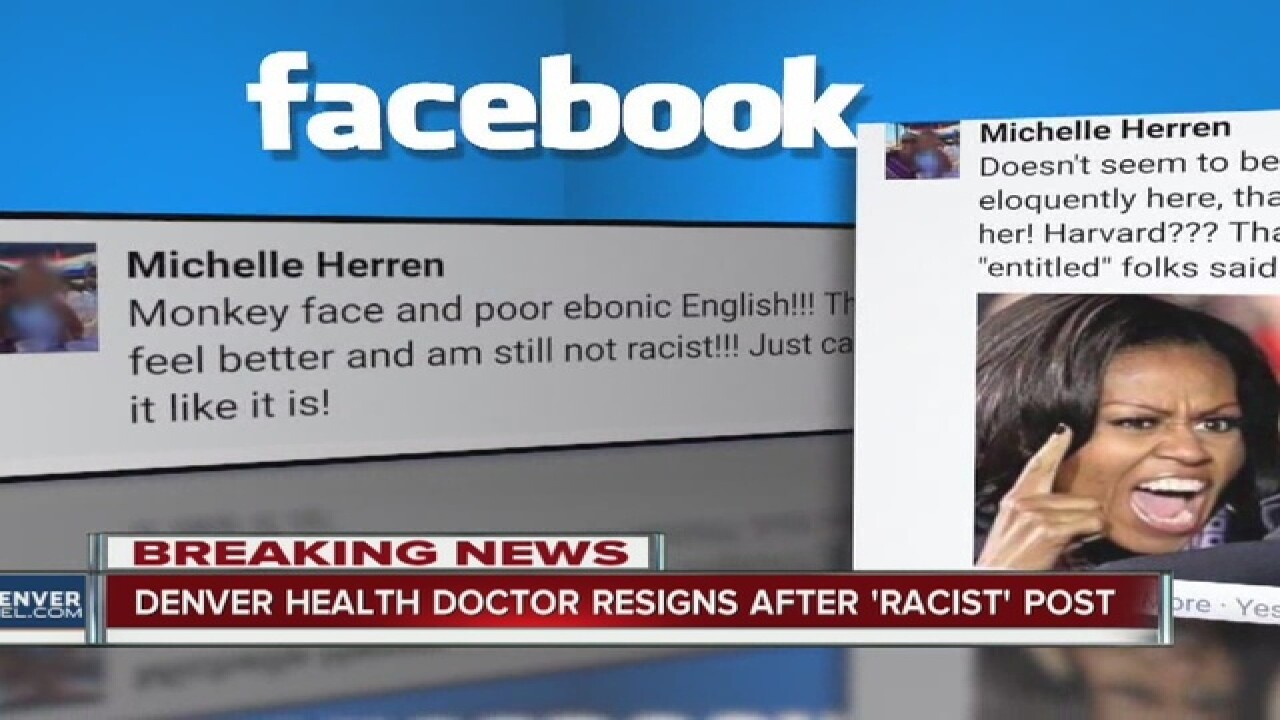 The emails, obtained through a Colorado Open Records Act request to the hospital, show Dr. Michelle Herren explaining her rationale for posting the comments and apologizing for what she wrote. Herren formerly worked at Denver Health.

“I am extremely sorry that something that was posted out of frustration was sort of taken out of context and not meant to be hurtful to anyone,” Herren wrote in one email.

The controversial Facebook post showed a picture of a yelling Michelle Obama with Dr. Herren commenting, “Doesn't seem to be speaking too eloquently here, thank god we can't hear her! Harvard??? That's a place for ‘entitled’ folks said all the liberals!” Dr. Herren went on to comment, "Monkey face and poor ebonic English!!! There! I feel better and am still not racist!!! Just calling it like it is!"

Dr. Herren sent all of the apology emails obtained by KMGH late in the evening of Nov. 28, the day before the station broke the story about her Facebook posts. Her posts led to national headlines and Herren resigned from the hospital Dec. 2.

Before the first report aired, Dr. Herren told KMGH reporter Molly Hendrickson over the phone that her comment was taken out of context and that she didn’t realize “monkey face” was offensive. Herren said she was responding to another post pointing out people say whatever they want about Melania Trump, but if they do the same about Michelle Obama, they're considered racist. She offered the same sort of explanation in her emails.

“In retrospect it sounded horrible and I am deeply sorry,” Herren wrote in one email. “I should never say anything mean about any person period, but my remarks were out of frustration for what seems to be a double standard of who is ‘OK’ to make fun of and who is not.”

Herren wrote she is “disgusted” with the president and first lady but added “it has never been about race… period.”

“I feel the race card gets pulled out in the reverse fashion and serves to discriminate against non-African American people, which is also racist,” she wrote.

Many social media comments reacting to the Herren controversy asked whether her racially-charged comments about Michelle Obama may have translated into similar attitudes about African-American patients. In the internal emails, she insisted she has “never had a negative thought based on someone’s race, culture, religion, sex or sexual preference.”

“I chose to work at Denver Health primarily because I want to give the best care to our underserved populations including primarily minority groups, homeless folks, refugees, undocumented immigrants, and prison patients. I am honored to work there and truly believe everyone ‘is’ and should be treated equally,” Herren wrote.

“It was never my intention to hurt anyone and sound like I don’t care for an entire race just because I don’t care for Michelle Obama,” she wrote in a later email. “I can’t imagine what possesses me to say things negative about another person when I despise that very act!”

In its response to the records request, Denver Health removed the names of the recipients of Herren’s emails. KMGH only initially requested Herren’s sent emails, so any messages she responded to were not included with the records produced by Denver Health.

While all of Herren’s emails were written before her comments were broadcast on television and shared widely on social media, her messages made it clear she was already suffering personal consequences for what she wrote.

“I absolutely understand how I look to everyone, and I did not mean for that to be the case,” Herren wrote. “I am terribly sorry to have offended long time friends who I adore, respect and would never ever mean to hurt. It was tacky and unkind and I let a frustrating post trigger me to say something nasty about another person. It is not my normal nature and I just wanted to express my apologies to everyone.”

Herren wrote in one message that she deactivated her Facebook account as soon as she learned her posts had offended friends.

“[Facebook] has only served as a source of stress, inaccurate information, and breeds hatred. Unfortunately family pictures don’t seem to make up for all the nastiness that I read on there and now I have slipped into being one of the nasties myself, so I have respectfully dismissed myself from further hurting others,” she wrote. “I haven’t had the opportunity to see just how many people this has affected and I apologize from the bottom of my heart for hurting dear friends.”

Denver Health released several statements before Herren’s resignation denouncing her social media comments, including this one:

“Denver Health is deeply disappointed by the remarks posted on social media by Dr. Michelle Herren against the First Lady of the United States. We are offended by the comments made by this individual, who was acting independently in her private capacity. Her views are contrary to the mission and values of Denver Health, and to our staff and patients. Denver Health proudly serves people of all races, genders, sexual orientations, and social backgrounds – and our staff and patient population truly reflect our diverse community and nation. We are reaching out to all of our patients, employees and physicians to reinforce our culture, mission and beliefs that all individuals regardless of their race, religion, ethnicity, gender or sexual orientation are deserving of dignity and respect.”

Before her resignation, Denver Health said Herren’s annual salary topped $360,000. She had worked at the hospital for 10 years.