Cowboys hold on against Vikings for 11th straight win 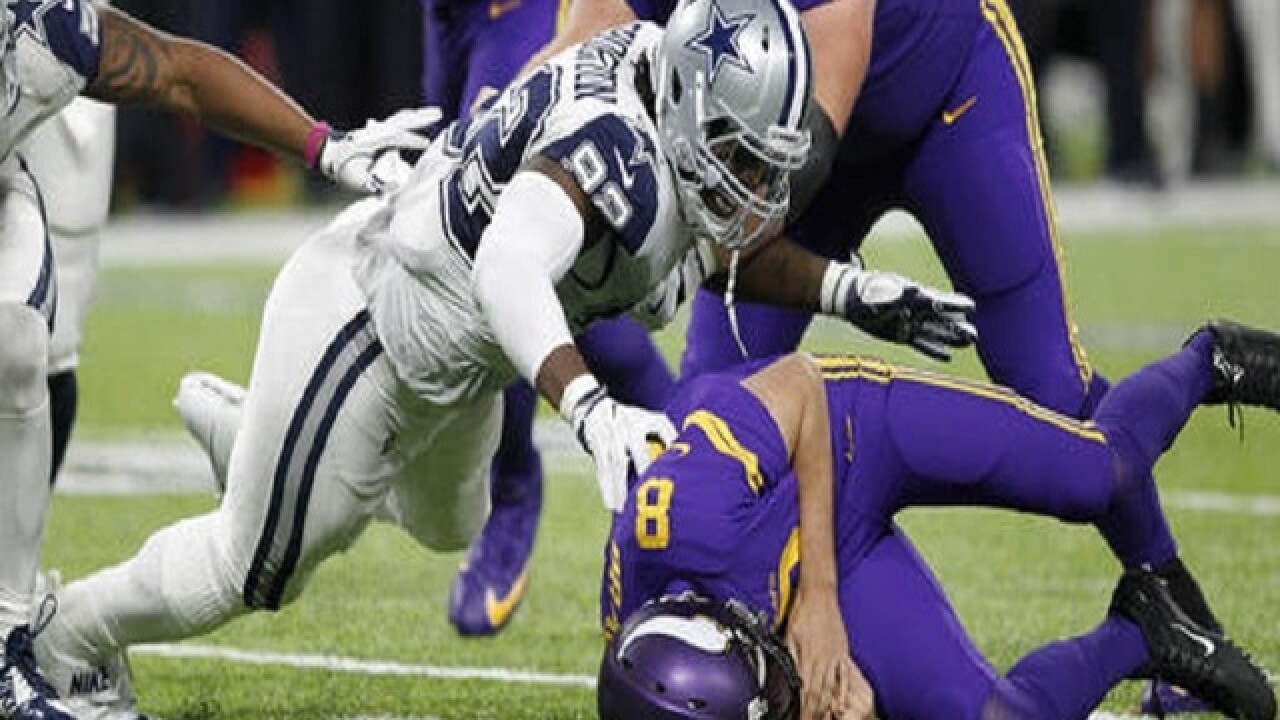 MINNEAPOLIS (AP) — Dez Bryant caught four passes for 84 yards and the go-ahead touchdown in the fourth quarter, helping the Dallas Cowboys win their 11th straight game with a 17-15 victory over the Minnesota Vikings on Thursday night.
Bryant's 56-yard catch in the first half set up Ezekiel Elliott's 1-yard plunge. The receiver caught an 8-yard scoring pass in the fourth quarter after a fumbled punt by Minnesota's Adam Thielen.
Elliott rushed for 86 yards on 20 carries for the Cowboys (11-1). They have the longest single-season winning streak in franchise history.
Sam Bradford threw a 3-yard touchdown pass to Jerick McKinnon with 25 seconds to play, but the 2-point conversion pass failed. Bradford argued for a penalty after he was hit in the face by a defender, but there was no call for the Vikings (6-6). Minnesota played without coach Mike Zimmer after he had emergency eye surgery Wednesday night.
Dak Prescott was 12 for 18 for 139 yards passing for Dallas.
Bradford completed 32 of 45 passes for 247 yards, Danielle Hunter had two sacks and Kai Forbath kicked three field goals for Minnesota, which has last six of the last seven games after a 5-0 start.
Vikings special teams coordinator Mike Priefer was elevated to head coach for the game and it remains unclear how long Zimmer will be out. Minnesota's third-ranked defense did their fiery leader proud, holding the explosive Cowboys offense to season lows in points, yards (264) and first downs (13).
The Vikings forced two turnovers from a team that had not coughed one up in the previous four games, including a strip sack by Brian Robison that set up Forbath's 33-yard field goal for a 9-7 lead early in the fourth quarter.
KEY PLAY
With Dallas' offense doing nothing, Kyle Wilber made the play of the game when he punched the ball out of Thielen's hand, then pulled the ball away as the two rolled to the turf. Officials initially did not catch the fumble, but a heads-up challenge by Jason Garrett got the call overturned and Prescott found Bryant on the next play.
CATCHLESS IN MINNEAPOLIS
Cowboys tight end Jason Witten did not catch a pass, snapping a team-record streak of 130 straight games with a reception dating to 2008.
MISSED OPPORTUNITY
On a night when offense was hard to come by, Vikings tight end Kyle Rudolph let a big-time opportunity slip through his fingers in the third quarter. Bradford squeezed a throw to Rudolph between two defenders, but the big tight end dropped what would have been a go-ahead 18-yard touchdown.
The Vikings settled for a field goal, cutting the Cowboys' lead to 7-6.
A TD TO TIE TD
Elliott's 1-yard plunge in the second quarter gave Dallas a 7-3 lead. It was his 12th touchdown rushing this season, tying him with Tony Dorsett for most by a rookie in Cowboys history.
BRADFORD UNDER SEIGE
Playing behind a patchwork offensive line that included center Nick Easton making his first career start in place of the injured Joe Berger (concussion), Bradford was under pressure all night long from a Cowboys defense that has often struggled in that area this season.
Bradford was sacked three times and had to leave the game on the final drive of the second quarter after taking a helmet from Maliek Collins to his rib cage. After getting some medical attention during halftime, Bradford was able to remain in the game.
ZIMMER TRIBUTE
Before the game, the Vikings played a short video of Zimmer addressing the team during a practice. Zimmer's primary message: "Do your job."
That has been a common theme during his three seasons in Minnesota, and the organization likely wanted the players to hear it one more time before taking the field. After the video, a picture of Zimmer was put on the big screen with a "Get Well Soon" message attached.
UP NEXT
Cowboys: Dallas heads to New York on Dec. 11 to face the Giants, the only team to have beaten the Cowboys this season.
Vikings: Minnesota will travel to Jacksonville on Dec. 11 to face the Jaguars, hoping the extra time off will be enough for Zimmer to recover and return to the sideline.
Copyright 2016 The Associated Press. All rights reserved. This material may not be published, broadcast, rewritten or redistributed.