Bus company no stranger to problems 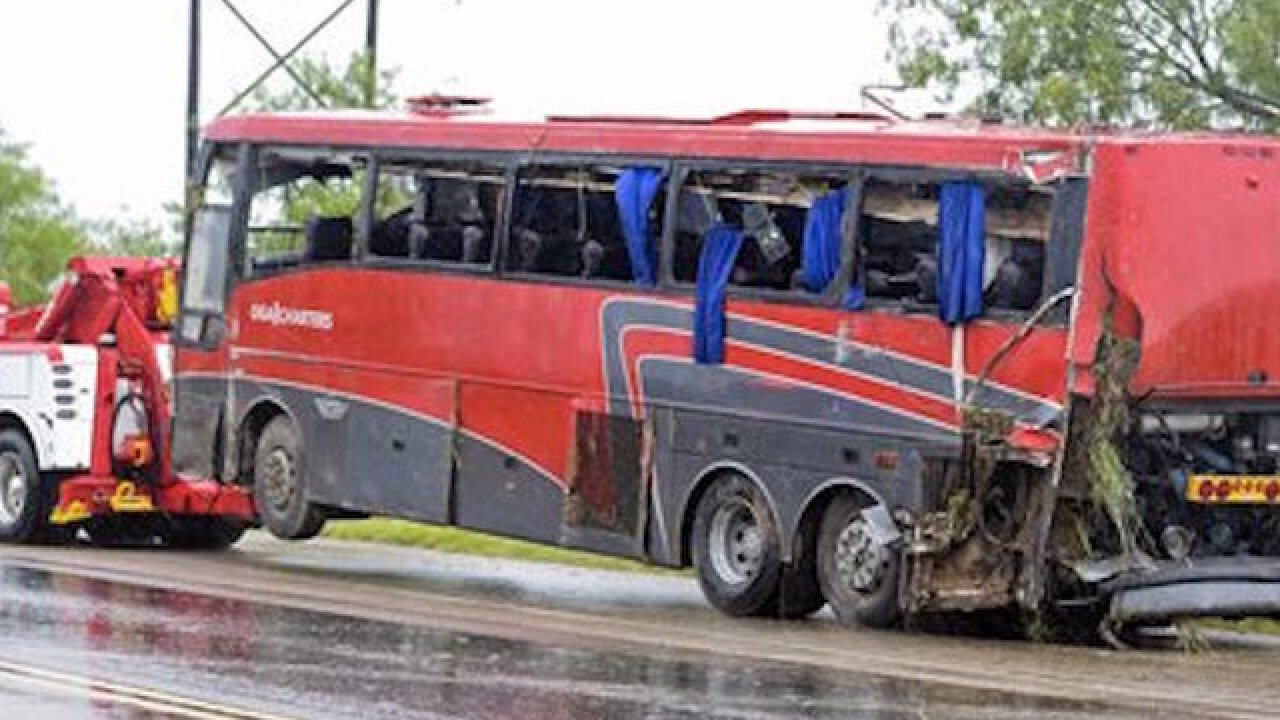 LAREDO, Texas (AP) — The small South Texas bus company involved in a rollover crash that killed eight people and injured 44 others had twice been ordered by Louisiana state inspectors in 2015 to take one of its buses off the road to fix brake and emergency exit problems.

Records posted online by the Federal Motor Carrier Safety Administration show that regulators ordered OGA Charters to sideline the bus in May 2015 because of brake problems and again in August of last year when they were getting worse.

It was not immediately clear Sunday if that was same charter bus that crashed Saturday about 46 miles north of Laredo, Texas, or what steps the company took to fix the problems with its sidelined bus between inspections.

National Transportation Safety Board investigators arrived Sunday in Laredo to try to determine a cause of the crash. Spokesman Keith Holloway said the agency will look at the operations of the company as part of its investigation but declined further comment.

According to federal online records, OGA Charters has two buses and the Motor Carrier Safety Administration had it listed with a "satisfactory" rating in May 2014.

Records noted that the company had reported no crashes in the last two years prior to Saturday. But six driver and vehicle inspections since 2014 found 15 total violations, ranging from driver records and hours they were on the road, to vehicle maintenance problems.

The May 2015 inspection in Louisiana reported brake connections with leaks, problems with the automatic brake adjustment system and a discolored windshield. The bus was put out of service because 20 percent or more of its brakes were defective.

The records don't name the Louisiana community where the inspection occurred.

Another Louisiana inspection just four months later found "general" brake problems, citing some of the same problems, and the emergency exit issue. Details of the emergency exit problem were not immediately available. The report also noted the discolored windshield problem and again ordered the bus out of service.

That the same bus, whether it was the one involved in the deadly crash or not, continued to have brake problems a few months after its initial inspection is a concern, said Shaun Kildare, director of research for Advocates for Highway and Auto Safety, a Washington, D.C.-based group that tracks bus crashes and federal highway safety regulations.

"We know this carrier had the vehicle violation problems," Kildare said. "They apparently didn't do anything. ... When they have vehicle problems they don't fix, that's a question."

The rate of violations for hours of service was marked as a problem area by federal regulators.

Officials at OGA Charters, based in San Juan, Texas, in the Rio Grande Valley, did not immediately return phone messages seeking comment.

Seven people died at the scene of Saturday's crash and another died at a hospital, Texas Department of Public Safety Trooper Conrad Hein said Saturday.

She did not immediately release ages or hometowns. The Laredo Morning Times reported the victims who died ranged in age from 52 to 81.

Hein said the driver was among those who survived.

"The driver of the bus lost control and rolled over," he said. "Everything's real preliminary right now."

He said it was raining Saturday morning but it was uncertain if that was a factor in the crash that occurred just before 11:30 a.m. He said no other vehicles were in the area at the time.

"Our troopers are going to look into what happened but it's going to take us some time," he said of the investigation. "We just know the driver lost control."

The injured were taken to hospitals in Laredo, Carrizo Springs and San Antonio.