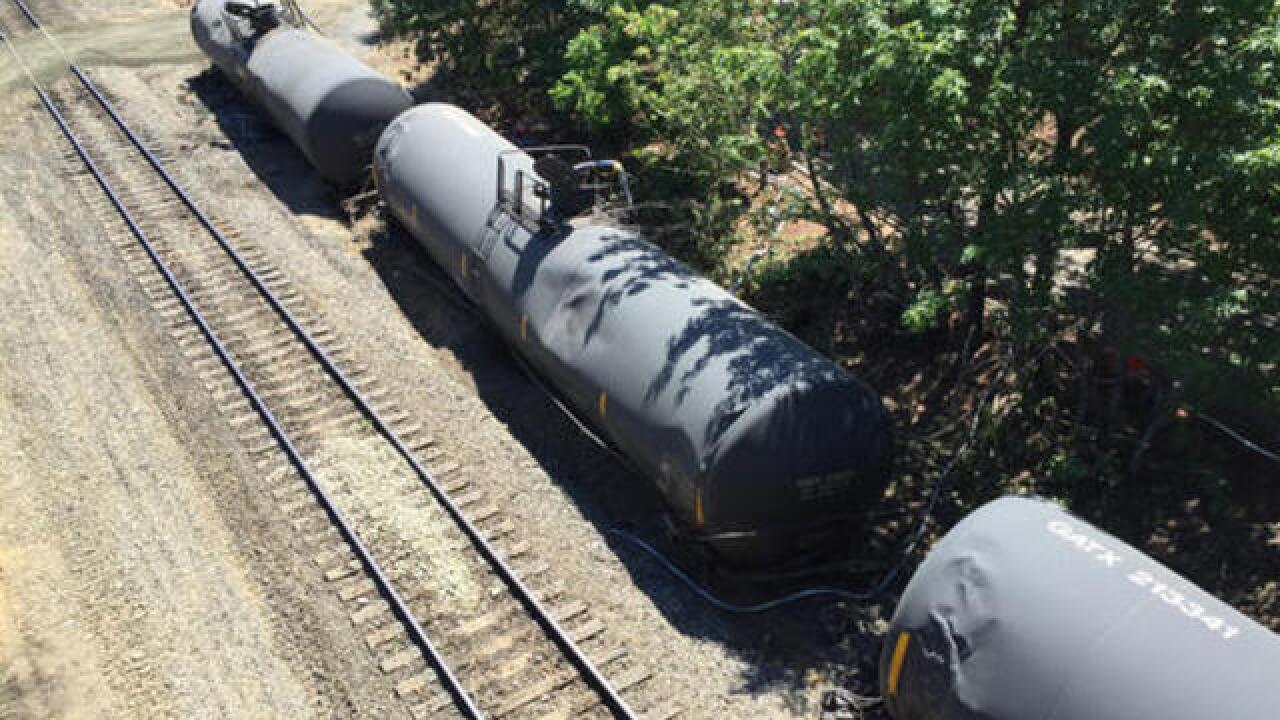 MOSIER, Ore. (AP) — Local politicians and residents reacted with shock and anger Monday as Union Pacific began running trains through this tiny Columbia River Gorge town just three days after a fiery derailment forced residents to evacuate and water and sewage systems to shut down.
Residents shot video from an overpass of trains sliding past crumpled and burnt oil tankers, some of them still dripping oil onto the tracks. The town's mayor and fire chief expressed deep concern about the trains running again before a full investigation was complete and before the damaged tankers were cleared.
Trains began running Sunday through the town of about 400 people carrying mixed goods — but no crude oil.
"This is all about money. They're willing to risk us blowing up again for their money to keep coming in," said Loretta Scheler, who rents out a two-story building just a few hundred feet from the tracks. "It's just insane."
The derailment occurred on a stretch of track that passes within 300 feet of the edge of the K-8 campus in this town 70 miles east of Portland. Sandwiched between the tracks and forested cliffs at a bend in the river, Mosier is part of a scenic area that's world famous for the summer winds that blow through the Columbia River Gorge and attract wind surfers and kite sailors.
Union Pacific defended its actions Monday, saying it was safe to run other trains while crews continued to drain oil from the crashed tankers. Thirteen tankers remained and 10 still contained crude, said Raquel Espinoza, a spokeswoman for the Railroad. Trains are moving at about 10 mph.
"We will not run any crude oil trains through this area any time soon," Union Pacific spokesman Justin Jacobs said Monday morning. "The community is at the forefront of our efforts, and we're absolutely aware of their concerns."
Several top Oregon lawmakers said later in the day that Union Pacific Railroad should not resume oil train traffic until the company thoroughly explains the cause of the derailment and provides assurances that it's taking steps to prevent another one. They stopped short of calling for limiting other train traffic.
Sixteen tank cars went off the tracks Friday. Fire started in four of the cars. An estimated 42,000 gallons of crude oil was released, said Don Hamilton, a spokesman for the state, federal and tribal agencies responding. About 10,000 gallons were recovered in wastewater systems, while the rest was burned off, captured by booms or absorbed into soil, he said.
No injuries have been reported. Dozens of residents have been given the all clear to return home.
Friday's derailment comes as a massive oil-storage terminal proposed along the Columbia River in southwest Washington is under review. The proposed terminal near Vancouver would handle up to 360,000 barrels of Bakken crude oil, where it would be stored and loaded on to tankers for export to West Coast refineries.
Critics say the derailment underscores the risk faced by every town and city along rail lines when trains carrying volatile oil roll by.
"It shines a light on how reckless approving the oil terminal would be," said Brett VandenHeuvel, executive director of the Columbia Riverkeeper. "I can't see how any reasonable person can look at this explosion and invite more trains."
The federal government regulates interstate railroad commerce, so cities and towns have no regulatory power over the movement of oil trains.
Eric de Place, policy director with Sightline Institute, a progressive think tank, said states and cities can deny projects in other ways, such as through zoning or permit restrictions. Hoquiam, Washington, last year approved a ban on bulk crude oil storage facilities. Vancouver is considering a similar ban.
Mosier is among dozens of communities that have officially called for stronger federal safety measures and other actions because of increasing oil train shipments through the Northwest.
"The federal government, the railroad and oil companies need to protect us," said Paul Blackburn, mayor of Hood River, a city about 7 miles west of Mosier.
Hood River passed a resolution in 2014 opposing the transportation of crude oil through the Columbia River Gorge either by rail or by barge.
Mosier Fire Chief Jim Appleton said he had been a supporter of Union Pacific's right to move oil through his town until the derailment.
Appleton, who operates with a fulltime volunteer firefighting crew of six and has 30-year-old fire trucks, said the derailment terrified him. Firefighters poured 1,000 gallons of Columbia River water a minute on the blaze for eight hours straight to bring it under control, he said.
"The media has been saying this incident is 'near Mosier,'" he said. "No. It went end-to-end through our entire town."
Copyright 2016 The Associated Press. All rights reserved. This material may not be published, broadcast, rewritten or redistributed.