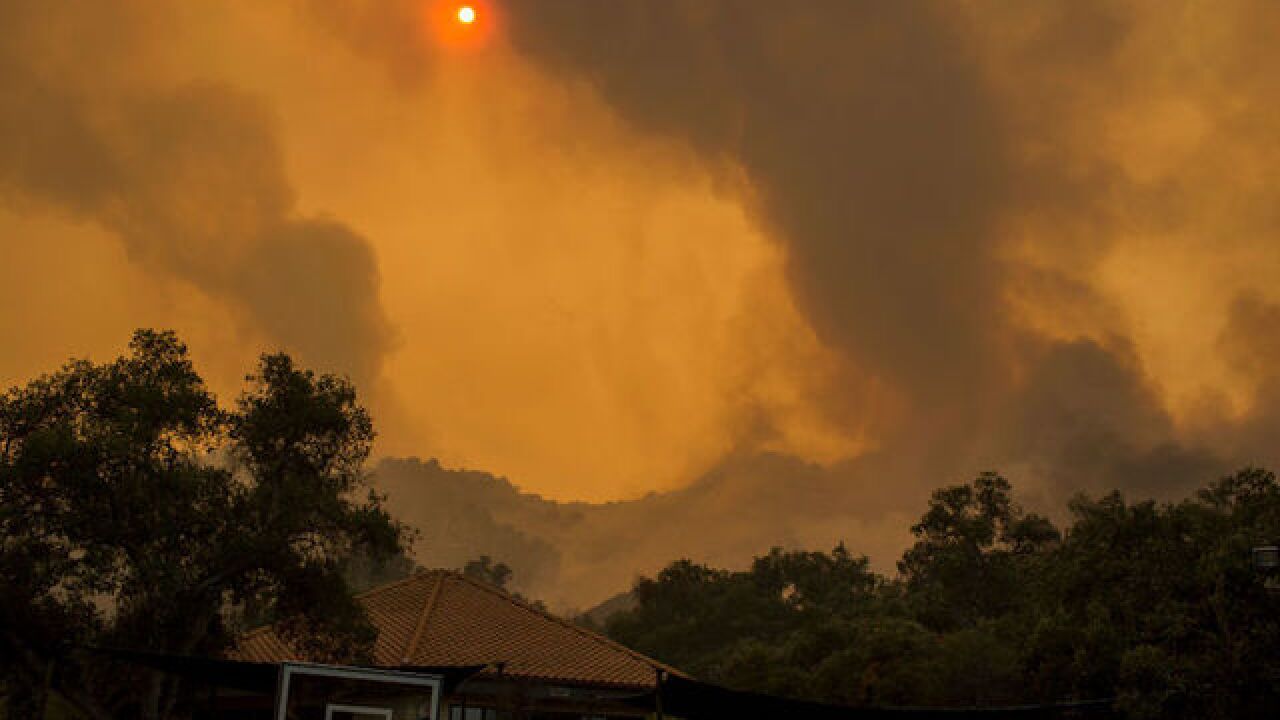 Image copyright 2018 Getty Images. All rights reserved. This material may not be published, broadcast, rewritten, or redistributed.
David McNew
<p>Fire approaches the Salvation Army camps in Malibu Creek State Park during the Woolsey Fire on November10, 2018 near Malibu, California. </p>

As firefighters make progress in containing a Northern California wildfire that has become the deadliest in the state's recorded history, high winds are expected to fan the flames of another major fire burning further south.

The region remains under both a "critical" and "extreme" risk Tuesday with winds of up to 60 mph and gusts of more than 70 mph possible, according to CNN Meteorologist Pedram Javaheri.

"On Tuesday, the threat also shifts a bit farther south into San Diego County as officials urge against any outdoor burning that can lead to rapid and explosive growth of a fire," he said.

Meanwhile, firefighters battling the Camp Fire in Northern California could get a break Tuesday as winds begin to diminish. The Camp Fire became the state's deadliest Monday after an additional 13 sets of human remains were discovered -- raising that fire's death toll to 42 and the statewide death toll from the latest wildfires to 44.

Firefighters made progress Monday in containing the blaze, which razed the town of Paradise, where most of the dead have been found.

'If you're going to die, die fighting'

Harrowing stories of escapes and close calls are trickling out of the region.

Paradise resident Nichole Jolly said she thought her life was over as flames surrounded her car, filling it with smoke. Then, she called her husband, who urged her to run, she said.

"If you're going to die, die fighting," she said, tearfully recalling his words.

Outside the vehicle, ash and hot embers stung her eyes and obscured her vision, she said. She felt around until she reached a fire engine that was hot to the touch. Firefighters pulled her inside, but they, too, were trapped, she said -- until a bulldozer came through and cleared a path to safety.

In some areas of the state, rescue efforts have turned into cleanup and recovery as residents return to what's left of their gutted homes in neighborhoods littered with charred remains of cars, trees and buildings. President Donald Trump on Monday approved a request for a Major Disaster Declaration that will provide the state with federal resources.

Latest developments by the numbers

• Camp Fire: More than 52,000 people have been evacuated and 1,385 are in shelters due to the Camp Fire. It has scorched more than 117,000 acres of Northern California, and destroyed more than 7,000 structures, including 6,453 single-family residences. As of Monday night, it was about 30% contained.

• Woolsey Fire: In Southern California, 57,000 structures are threatened by the Woolsey Fire. It has burned more than 93,000 acres and destroyed at least 435 structures. As of Monday, it was about 30% contained.

Causes of fires still being investigated

California state regulators are investigating two utility companies that reported incidents close in time and location to the start of the Camp and Woolsey fires.

Preliminary incident reports submitted last week to the Safety and Enforcement Division of the California Public Utilities Commission provide a glimpse of conditions near the origins of the deadly blazes. Both utilities say they are cooperating with state investigators.

Almost 15 minutes before the Camp Fire began near Pulga, PG&E said it experienced a transmission line outage about 1 mile northeast of the town.

In Southern California, where the Woolsey Fire began Thursday afternoon in unincorporated Ventura County, SoCal Edison reported that a circuit relayed out of the Chatsworth Substation about two minutes before the blaze broke out. The incident location in the report appears to be the same as CalFire's location for the fire's origin. But it's not clear how close they actually are to each other.

SoCal Edison's report says, "at this point we have no indication from fire agency personnel that SCE utility facilities may have been involved in the start of the fire."

About 100 people are still unaccounted for statewide, authorities said Monday. Officials are hoping those people are safe elsewhere, but with wildfires still burning, the death toll is expected to rise.

So far, 42 bodies have been recovered from homes and vehicles in or near Paradise. The Butte County Sheriff's Office identified three of the victims as Ernest Foss, 65, from Paradise; Jesus Fernandez, 48, from Concow; and Carl Wiley, 77, from Magalia.

In Southern California, officials said two deaths in Malibu were related to the Woolsey Fire, bringing the statewide death toll to 44.

California Highway Patrol Chief Brent Newman asked for the public's patience as teams clear affected areas. As part of those efforts, CHP teams removed 60 abandoned cars and set up barriers around dangerous areas. He urged people trying to cross them so they can reach their homes to be patient.

"It is not a safe environment whatsoever," he said.

Residents displaced with no end in sight

More than 300,000 people have been forced from their homes statewide. The majority of those residents are in Los Angeles County, where 170,000 were evacuated.

The evacuees included celebrities who lost their homes in Malibu as well as first responders who are setting aside their grief to save others. While much of Malibu lies in ruins, the city's mayor pro tem, Jefferson 'Zuma Jay' Wagner, is recovering in a hospital after trying to save his home.