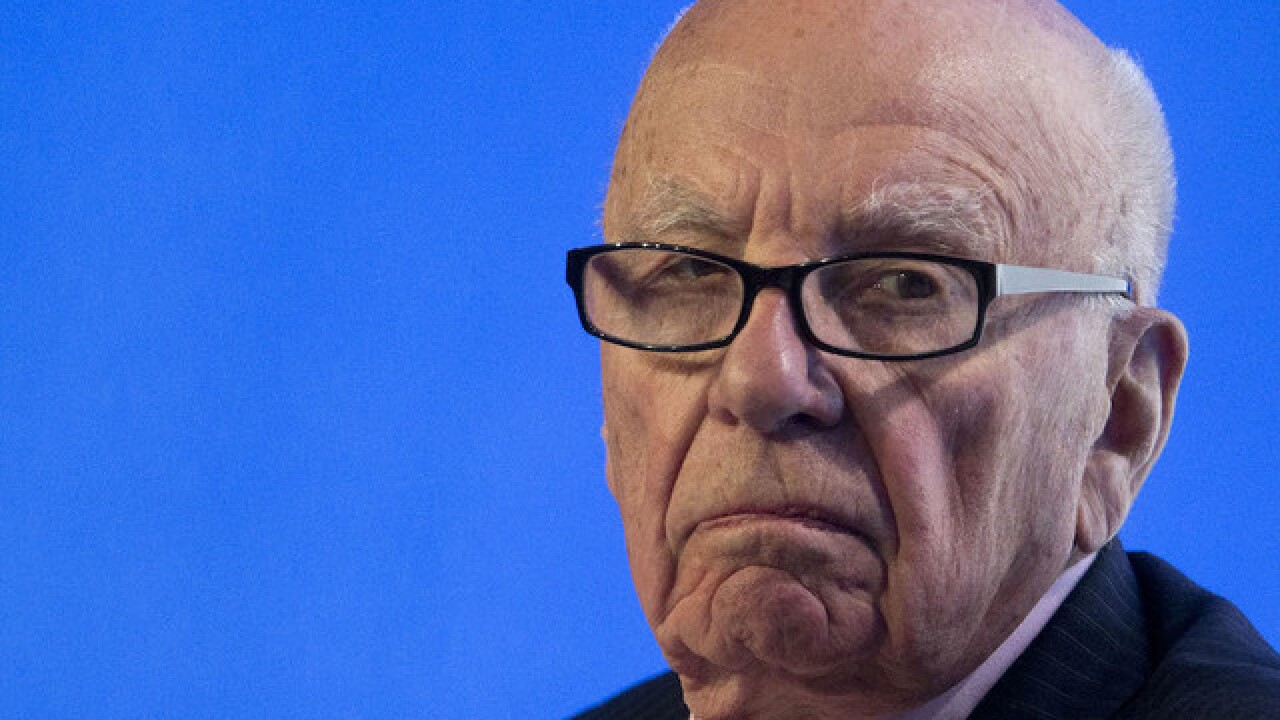 Copyright Getty Images
Pool
<p>Rupert Murdoch, Executive Chairman News Corporation is during a panel discussion at the B20 meeting of company CEOs in Sydney, July 17, 2014. The B20 was set up in 2010 to give policy recommendations on behalf of the international business community to the G20 member countries. REUTERS/Jason Reed (AUSTRALIA)</p>

LONDON (AP) — Rupert Murdoch took a big step toward consolidating his power base in British media after his U.S. media group Twenty-First Century Fox agreed Thursday to buy the shares it doesn't already own in Sky PLC for 11.7 billion pounds ($14.6 billion).

Twenty-First First Century Fox already owns just over 39 percent of Sky. An earlier attempt to acquire the rest was scuttled by the 2011 phone-hacking scandal that rocked Murdoch's British newspapers and the media establishment.

Another approach has long been predicted, especially as anger over the hacking scandal — which led Murdoch to close the 168-year old News of the World tabloid — has abated.

The steep drop in the pound following Britain's vote to leave the European Union has also made the London-based company cheaper to take over.

"The whole thing was done in the most dramatic way as if it were a TV show — 'West Wing' or something," she said.

This time, she said the transaction is likely to be methodical and by the book.

James Murdoch, Rupert's son and the chief executive of Twenty-First Century Fox, became chairman of Sky in April. He had been CEO of Sky, then known as BSkyB, from 2003 to 2007 and chairman from 2007 to 2012.

The two companies said the takeover is not expected to be completed before the end of 2017.

It is not a done deal, and has the potential to be messy politically. Culture Secretary Karen Bradley has 10 working days to decide whether to refer the deal to Britain's communications regulator, Ofcom.

Enders said the new bid is very different to the 2010 offer because it doesn't comprise the same assets.

In the last bid, the combination would have joined 40 percent of the newspaper market in the U.K. with around 35 percent of the television market. Murdoch has since split his media empire into two companies — 21st Century Fox and News Corp. This time around, News Corp. and its newspaper properties aren't part of the deal.

Former Business Secretary Vince Cable — who referred the 2010 takeover bid to Ofcom — said Bradley should "start the process of independent investigation into the impact on plurality and competition."

"The takeover would strengthen even further the grip of a major media owner on U.K. media," he said.

Taking control of Sky will give Twenty-First Century Fox, which owns cable networks Fox News, FX and the Fox broadcast channel and a major Hollywood film studio, a distributor in Europe. Sky has 22 million customers in the U.K., Ireland, Germany, Austria and Italy.

"The strategic rationale for this combination is clear," Twenty-First Century Fox said in a statement. "It creates a global leader in content creation and distribution, enhances our sports and entertainment scale, and gives us unique and leading direct-to-consumer capabilities and technologies."

The move comes as part of a wider consolidation among media and broadcasting companies — bringing together the maker of films and television programs together with distributors of content. Entertainment companies are trying to adapt as consumers increasingly bypass traditional TV and spend more time watching video on their phones.

In Europe, France's Vivendi media group has accumulated a 20 percent stake in Italy's Mediaset, potentially setting up a hostile takeover bid. Shares in Silvio Berlusconi's Mediaset empire were volatile Thursday after the government suggested it wouldn't accept a hostile acquisition.