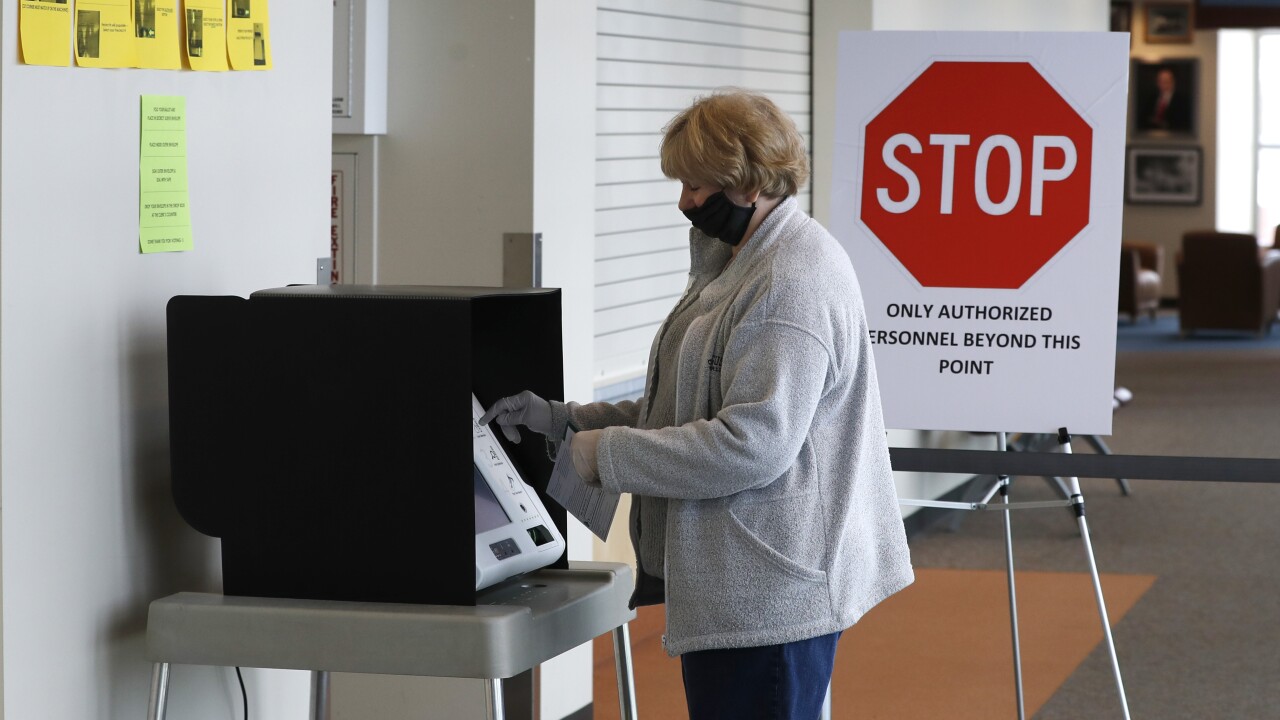 Copyright 2020 The Associated Press. All rights reserved.
Carlos Osorio/AP
Deborah Watts votes at the Warren City Hall, Tuesday, May 5, 2020, in Warren, Mich. People in about 50 Michigan communities are participating in largely mail-based local elections that might be a blueprint for the presidential battleground state in November. (AP Photo/Carlos Osorio)

Michigan communities saw record turnout for local elections Tuesday, as voters participated in largely mail-based contests that could be a blueprint for the presidential battleground in November.

In a first, Secretary of State Jocelyn Benson’s office automatically sent absentee ballot applications to all 740,000 registered voters in roughly 50 municipalities — about 10% of the electorate — to discourage in-person voting in a state where nearly 4,200 people have died from coronavirus complications. Turnout was projected to be at least 22%, nearly double the average for May elections.

“People want to vote and weigh in on critical issues in their communities. ... Even in crisis, democracy is essential,” Benson, a Democrat, said.

Each jurisdiction had at least one place for in-person voting, though only about 850 people had done so as of late afternoon. Absentee ballots — roughly 180,000 had been returned by 6:30 p.m. — accounted for 98% of the vote.

Democratic Gov. Gretchen Whitmer in March used her emergency powers to expand absentee voting by letting the state mail ballot applications with postage-paid return envelopes to every voter in 53 communities across 33 counties.

Deborah Watts, a 66-year-old retiree, voted Tuesday on the third floor of Warren City Hall just north of Detroit. After she was allowed in through a locked door, Watts kept her distance before voting. The city clerk wiped the voting machine down after each use.

Watts, who said she felt safe, said she misunderstood the application process.

“But I still wanted to vote, so I came out here to vote,” she said.

Erin Jones, 42, of Warren, said she received an application some time ago. Mistakenly believing it was an actual ballot, Jones set it aside and didn’t look at it until Friday. So she voted in person.

“I felt fine the whole time,” Jones said, adding “it was weird” that so few people were around.

Normally in Michigan, it is up to voters to ask their local clerk for an absentee ballot. Some communities let voters request to join a permanent list to get an application every election, while others do not.

Absentee voting already is easier in the state under a 2018 constitutional amendment that lets voters cast an absentee ballot for any reason. More than 877,000 people voted absentee in the March 10 presidential primary, 39% of the nearly 2.3 million votes cast.

Whitmer, who is thought to be among the contenders to be Biden’s running mate, has sparred with President Donald Trump about the federal government’s response to the pandemic. And Trump has opposed expanding mail-in voting.

In April, more than 50 people who voted in person or worked the polls during Wisconsin’s presidential primary tested positive for COVID-19 , according to the latest count by state health officials tracking the impact of holding the election in the middle of a pandemic.

Last weekend, the Democratic presidential primary in Kansas was conducted exclusively by mail because of the pandemic. Some Democrats have long argued for greater use of mail balloting as a way to boost turnout, but some Republicans remain wary, suggesting it may not be secure.

“Today’s election easily could have been postponed and rolled into our August election, instead of risking the health of Michigan election workers,” said Laura Cox, chairwoman of the state GOP. She said Whitmer’s stay-at-home order “only applies when it benefits her agenda.”

But Benson said postponing or canceling the election would have set a dangerous precedent and noted the higher turnout. She gave communities the opportunity to withdraw or postpone measures on their ballot until later, and half did so. But others proceeded because their schools would not have money to operate without tax votes or for other reasons, Benson said.

The state recruited people to help in case election workers were not comfortable working. It also provided masks, gloves, hand sanitizer and wipes to municipalities.

Benson said “more citizens than ever are going to choose to vote from home” in November. “My goal is to ensure that every citizen knows that they have a right to vote by mail and they know how to exercise that right.”