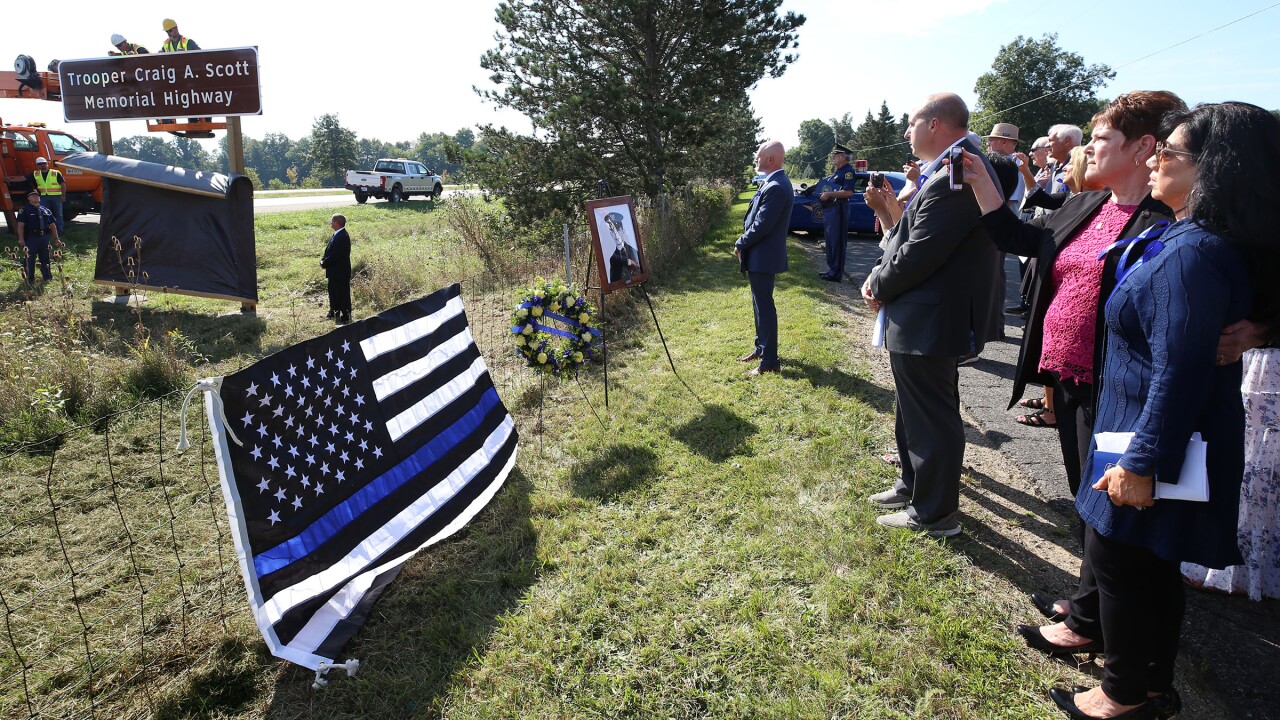 LANSING, Mich. — Today, Sen. Curtis Hertel, Jr. (D-East Lansing) joined the family of fallen State Trooper Craig A. Scott and members of the Michigan State Troopers Association to dedicate a portion of U.S. 127 to the officer, who was fatally shot during a traffic stop.

“Today’s event is more than a sign unveiling; it’s a show of our gratitude for Trooper Scott and his loved ones for making the ultimate sacrifice for the safety of our community,” Sen. Hertel said. “Trooper Scott represented the values of excellence, integrity and courtesy that we’ve come to expect from his extended family in the State Police. This memorial also represents the loss, pain and hardship of his family who have gone through so much. This has not gone unnoticed by our community, and I’m honored to have played a small role in this memorial that honors a true community hero.”

Last year, Sen. Hertel passed legislation that was signed into law naming a portion of U.S. 127 — from exit 56 in Ingham County extending south to the Jackson County line — the “Trooper Craig A. Scott Memorial Highway.” The location is where Trooper Scott was fatally shot after pulling over a speeding vehicle. Amid the arrest of two suspects for lacking proper verification, the vehicle’s passenger fired at Scott multiple times, including a fatal shot that evaded his bulletproof vest which, at the time, did not include side panels. The vehicle was later discovered to have been stolen and both offenders are currently serving life sentences.

“To see Craig's memorial highway sign will, although bittersweet, give me a sense of pride in knowing his passion for the Michigan State Police and his dedication to the profession,” said Lydia Amaya, Trooper Scott’s widow. “‘Never to be Forgotten’ is a motto that rings in ALL law enforcement and after 37 years, for Craig, still holds true.”

It is because of Trooper Scott’s death that Michigan State Police implemented changes to increase officer safety, including adding side panels to bulletproof vests.

Trooper Nate Johnson, president of the Michigan State Police Troopers Association, who also was present at the ceremony, added, “It is important to honor and recognize the incredible sacrifices made by troopers and other law enforcement officers.”

“We always promise we will never forget, and this sign is proof of that,” said Ingham County Sheriff Scott Wriggelsworth. “It may have been 37 years, but a promise is a promise. Ingham County and our Sheriff’s Office are forever grateful for those, like Trooper Scott, who made the ultimate sacrifice in the name of protecting and serving our community.”