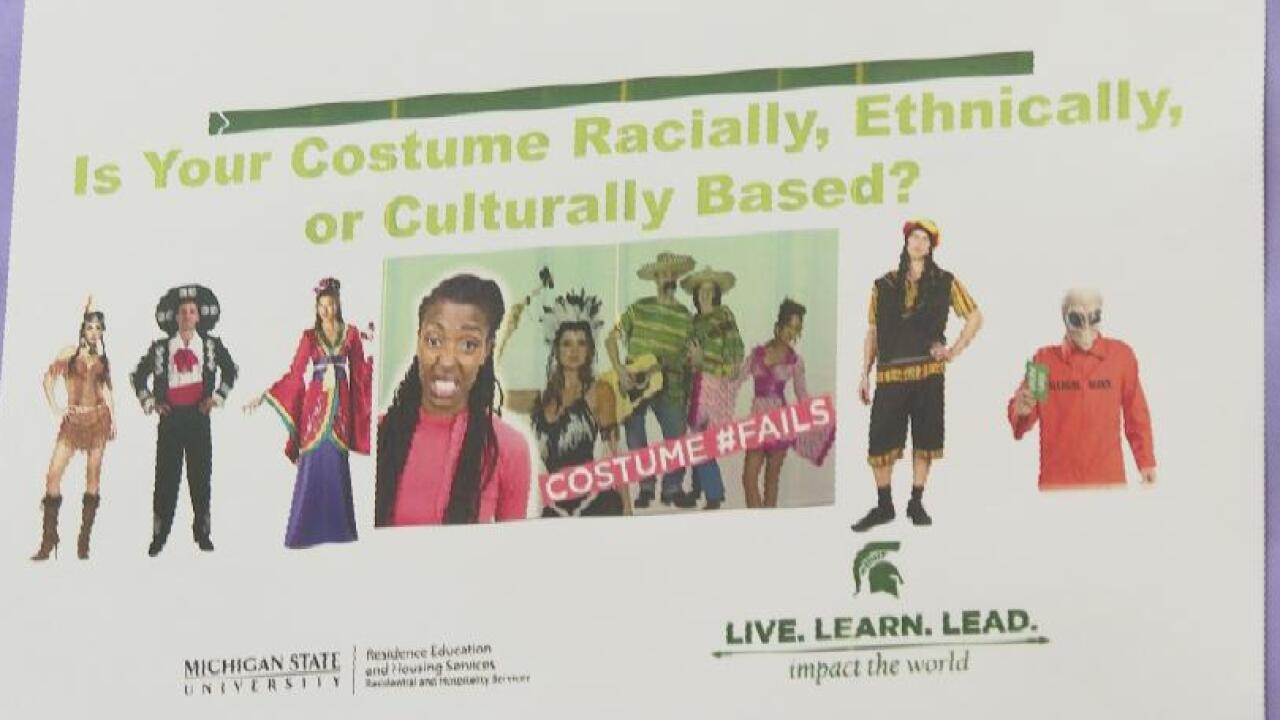 LANSING, Mich. — Michigan State University finds itself right in the middle of the culture wars over Halloween costumes.

Conservative bloggers jumped all over MSU Friday because of signs asking, "is your costume racially, ethnically or culturally-biased"?

One of them is former game show host Chuck Woolery -- who incorrectly accused Michigan State of banning mustaches, sombreros, and other accessories in a tweet to his 600,000 followers.

Sergei Kelley, a senior at MSU, first noticed the fliers in his dorm hall less than week ago. The message was loud and clear: 'A culture is not a costume.'

"They're some good intention behind it. We don't want to make fun other people's cultures. You don't want to say, I'm going to wear this to purposely mock you or mock what your culture stands for," Kelley said. "But I think there's a difference between that and telling students wearing a sombrero with a mustache is somehow racist."

The fliers also explain to the reader the difference between cultural appropriation versus appreciation.

One highlights the issue of 'hypersexualized racism.' The flier explains that as, "When a costume's humor or sexiness is solely based on race, ethnicity, or culture, those people's human elements are being extracted for the sake of bringing us laughter or makes us feel more exotic."

Kelley said that the university is out of line.

"The first priority of students here is to learn. They're here for their degree and to get their career later on and so this doesn't fall in line with MSU's job."

Although another student said that he actually likes the message.

"I really don't think that it's too much too ask for people to not appropriate another culture. I think more university's should take a stance against things like this. Especially times that we have today where there's so many issues going on with race and what not, so I think it's really important they make this message," said Yancy Wingard, a senior at MSU.

Emily Guerrant, a spokesperson for the university told News 10 that the RA's choose what to put up on the boards and they've been sending out the same message for the last few years.

Guerrant said that the university is not saying students can't dress that way, but they just want them to know how their costumes can be portrayed.

Guerrant said that the messages on the notice boards get reviewed every year.

Some conservative groups accused MSU of being too politically correct in August when the university advised employees not to use phrases like "no problem" and "I apologize," because they could be triggering.