Guns in capitol building ‘not what we signed up for’ says state rep.

State Rep. Sarah Anthony continues to fight to have firearms prohibited from the capitol building in Lansing 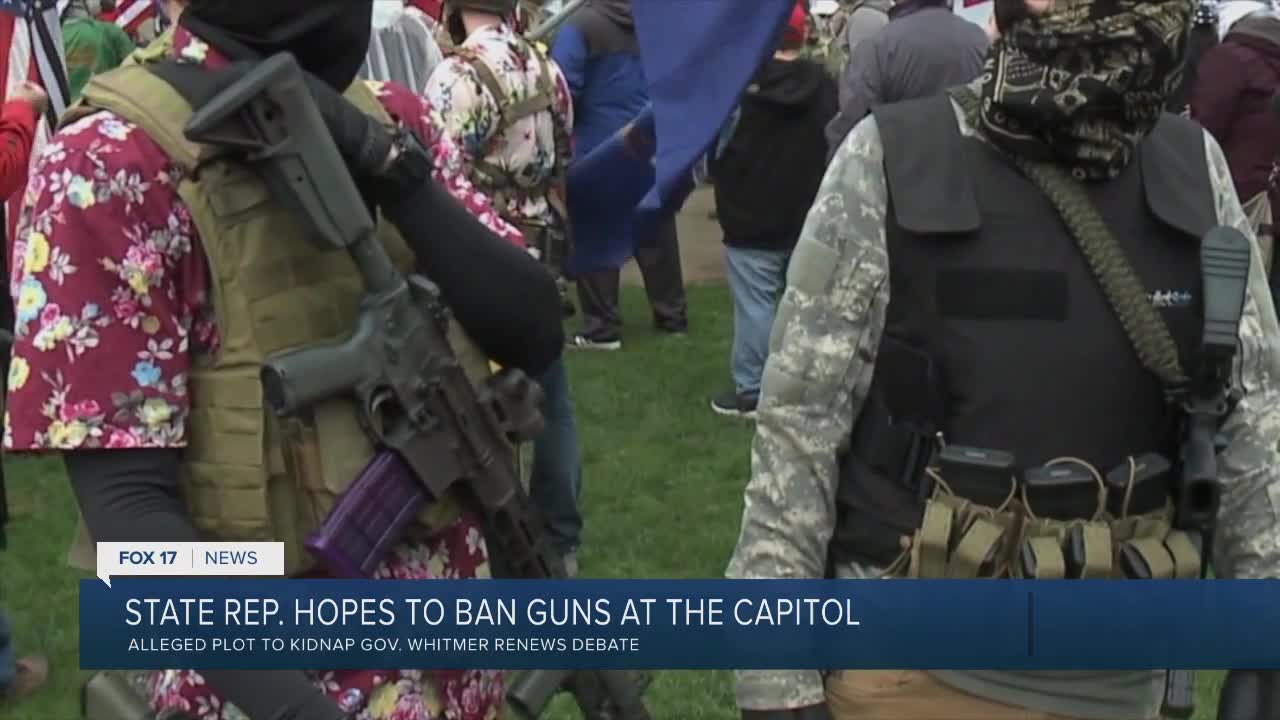 State Rep. Sarah Anthony (D-Lansing) continues to fight to have firearms prohibited from the capitol building after armed "fringe" groups stormed the building in late April.

When State Representative Sarah Anthony found out about an extremist group's plot to kidnap Gov. Gretchen Whitmer before the election, she was shocked. Anthony said she lives in the same community as Whitmer and her “heart went out to the governor and her family.”

“I think that we can disagree with each other’s politics without resorting to violence. That was just very disappointing and also just horrifying,” Rep. Anthony said during an interview over Zoom on Thursday October 15. “We as elected officials, we signed up to serve but that’s not what we signed up for.”

Rep. Anthony said she also had a “weird feeling of validation” after learning about the plot against Whitmer because it affirmed her fears about the dangers of some of the armed groups that protest outside the Capitol building where she works.

“We now know that on that day they stormed our capitol building, several of the men were named in the terrorist plot,” Rep. Anthony said. “That just goes to show you that those fears were affirmed. So it is validating.”

On April 30, dozens of people stormed the capitol with firearms. That day Senator Dayna Polehanki's tweet went viral, which stated in part “Directly above me, men with rifles yelling at us. Some of my colleagues who own bullet proof vests are wearing them.”

“The fact that anyone can carry firearms into the building I think is just a little bit off,” she said. “Michigan is one of a small number of states that still allow firearms in the state capitol building. So we are definitely an outlier across the country.”

Whenever Rep. Anthony brought up her safety concerns, she was met with harsh criticism, she said. When she went to work the following week, escorted by several armed men who asked to be by her side, people said she was trying to “grab a headline or play partisan games,” which wasn’t true.

"I couldn’t articulate a firm plan that the capitol police or the state police had to secure to make sure I was safe," Rep. Anthony said. "In the absence of that, it was just comforting to know that people in the community have my back."

Also, immediately following the protest, she wrote a letter to the Capitol Commission asking that they sincerely consider prohibiting firearms from the capitol building. Since then, she’s sent additional letters, testified before the commission and sent emails requesting an update. However there’s been no resolution, she said.

“[The commission] claimed that they are meeting with the legislative Republican leadership to determine if they will allow guns in the capitol but we haven’t received any update,” she said. “So we continue to go into the building with the possibility that armed gunmen could once again return and use their weapons to incite fear and intimidation.”

FOX 47 reached out to the commission via email who stated that they'd like to meet with legislative leaders and that "we put off any decision until negotiations with leaders have either concluded or run their course."

FOX 47 also reached out to Senate Majority Leader Mike Shirkey and Speaker of the House Lee Chatfield for a comment but have yet to hear back.

Rep. Anthony said she hopes they're taking her request seriously. Safety is a top priority not just for her, she said, but for everyone else in the building: the custodians, painters, and administrative staff.

“I would just ask folks just to pray for us,” Rep. Anthony said. “We hope that this issue is resolved so that we can get back to the real work.”