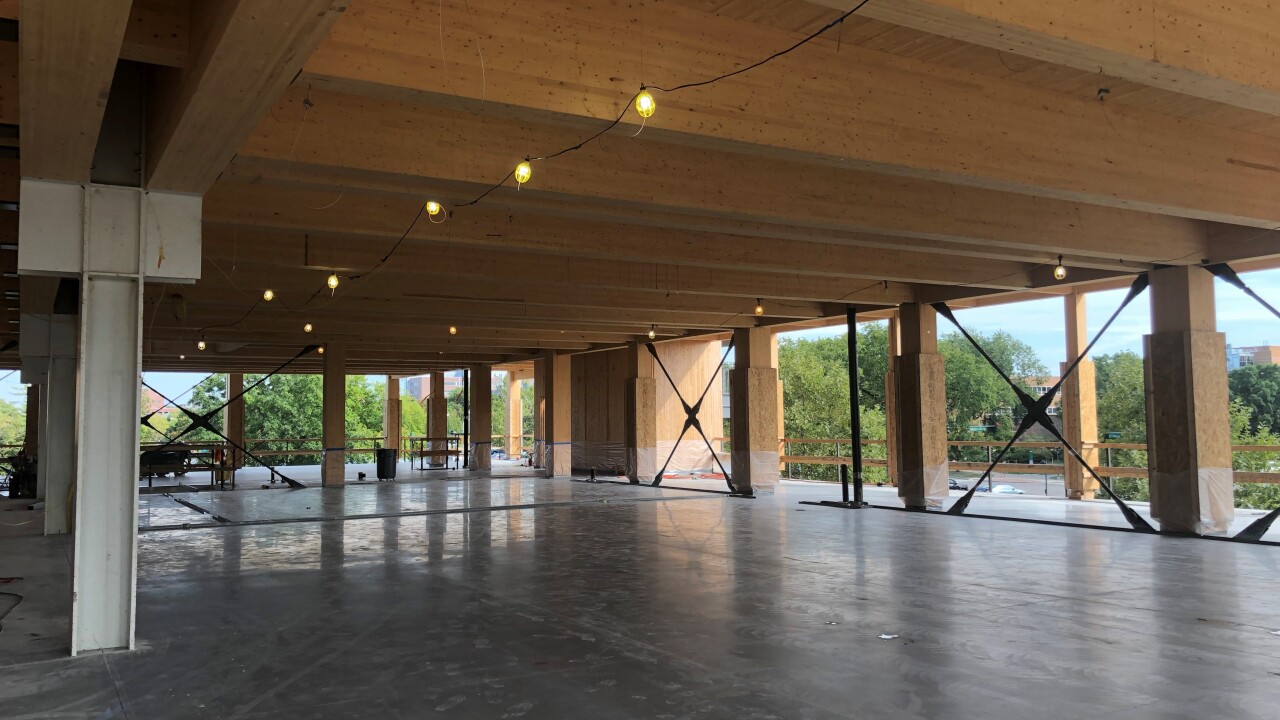 LANSING, Mich. — Cross-laminated timber (CLT) — which consists of large structural planks glued together to form beams and columns — used in MSU’s STEM facility will store carbon that would otherwise be released into the atmosphere.

Glulam beams during construction of the mass timber used in the new STEM Teaching and Learning Facility.

If you’ve been on the Michigan State University campus in the past several months, you’ve likely spotted the construction around the former Shaw Lane Power Plant, adjacent to Spartan Stadium.

Work began in June 2019 on the new STEM Teaching and Learning Facility. This state-of-the-art facility will be made with mass timber [u7061146.ct.sendgrid.net], which includes glulam (glue-laminated) columns and beams and cross-laminated timber (CLT), making this structure the first of its kind in the state [u7061146.ct.sendgrid.net] and a national example for wood infrastructure.

Using mass timber in buildings has a number of advantages, including reduced construction time and fire and earthquake resistance. One particularly important benefit to using mass timber is its role in reducing carbon entry into the atmosphere, making these types of buildings an important potential asset in fighting climate change.

“Use of timber in buildings, bridges or other infrastructure results in a 'substitution effect' — avoiding emissions that would have been created by [using] materials such as steel or cement,” said Lauren Cooper, program director of the Forest, Carbon and Climate Program.

In addition to avoiding harmful emissions, wood in mass timber buildings also stores carbon that would otherwise be released into the atmosphere. Forests naturally have cycles of growth and mortality. When trees die and decompose, they release carbon back into the atmosphere. The use of wood material delays the return of carbon to the atmosphere, lowering atmospheric CO2 levels.

The cross-laminated timber (CLT) -- which consists of large structural planks glued together to form beams and columns -- used in the MSU STEM facility will store a total of 1,853 metric tons of CO2. This is the equivalent of removing 394 cars from the road for a year.

“Sustainable forestry and long-term storage of carbon in wood structures is an important strategy for fighting climate change,” said Rich Kobe, a forest ecologist and chair of the MSU Department of Forestry.

“Trees take up carbon through photosynthesis and store that carbon in their wood. Thus, forests and wood products are nature’s technology to combat climate change and one of the most effective and least expensive climate change solutions out there,” Kobe said. “I think that everyone will appreciate a world with more trees and beautiful wood buildings.”