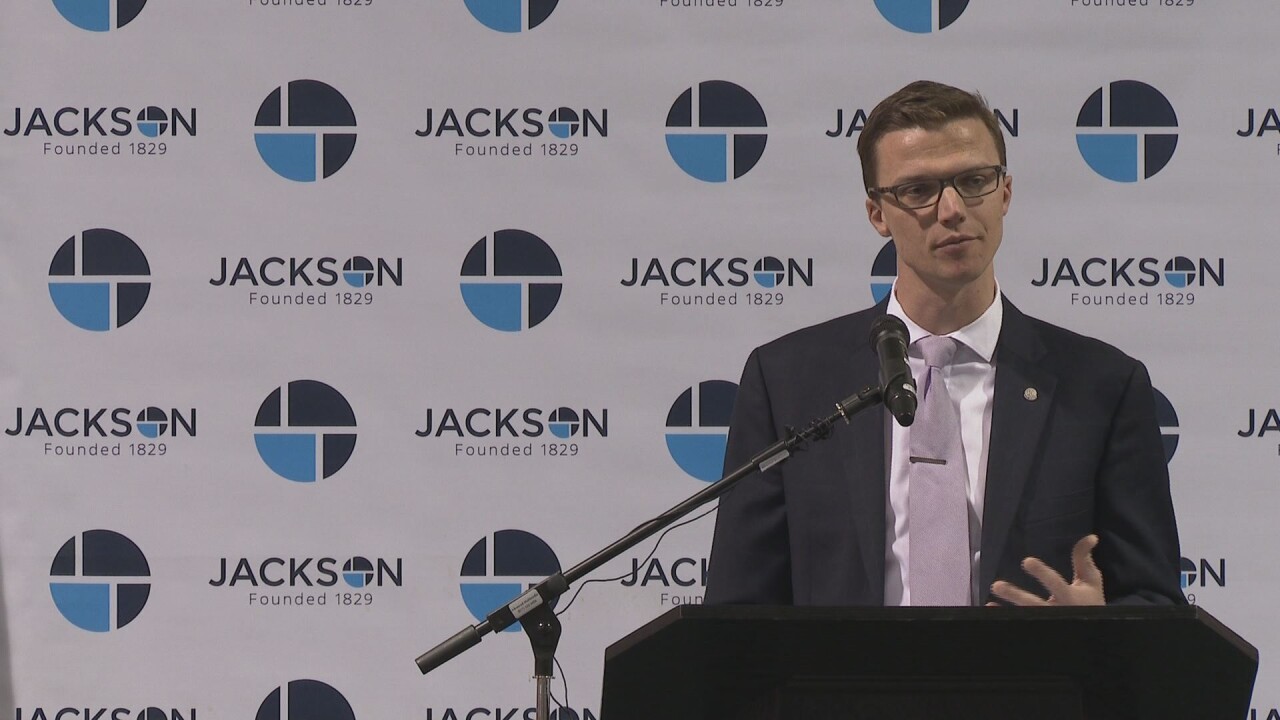 "Together, I believe we can aim to have 100% of our energy come from renewables for city operations by 2035; and set attainable (greenhouse gas) reduction and renewable energy goals for the rest of our community infrastructure," he said.

Dobies said he wants the city to do what it can about climate change.

"Climate change will affect every state, every city, every neighborhood and block," Dobies said.

Consumers Energy is working to develop a smart energy district downtown, including solar panels and battery storage, which would "produce 40% of the district’s energy needs with onsite renewables, and reduce the district’s carbon emissions by 90%," he said.

"This year, we aim to grab the top spot, becoming home to the most ENERGY STAR certified buildings for a small city," Dobies said.

Health of Jackson residents is a continued priority, Dobies said.

In previous years, hundreds of vacant buildings have been removed from Jackson neighborhoods.

The city has "tremendous parks," and Dobies signed a pledge last year to ensure high-quality parks within a 10-minute walk of home for residents.

About 91% of residents currently are within a 10-minute walk to a park, but Dobies said he wants to improve that to 100%.

He said physical and nutritional health for residents is important, too.

Many neighborhoods are considered to be food deserts, where residents can't easily access affordable and nutritious food near home and don't have easy access to transportation.

Dobies said he went from Nixon Park to the east side Meijer and back on the No. 4 bus, just to see how long it would take.

He said it took him an hour and 50 minutes, without stopping to shop.

He said two women on the bus told him that buses allow only two bags of groceries, forcing them to make multiple trips to get groceries.

Dobies said the city will be working with the Jackson Health Improvement Organization to help get a grocery store downtown. The city will work with them and other partners to help residents learn how to cook healthier meals, using the new market incubator inside the Vermeulen's building.

The city plans to work with JATA to extend their hours and hopefully allow more than two bags of groceries on the buses.

He said the city is exploring getting a mobile market in the city to help neighborhoods even further.

Jackson has identified 30 neighborhoods in the city.

Dobie announced a Neighborhood Association Ordinance that would help the city deliver information faster when issues arise or when new development affects residents in specific neighborhoods.

Police have been equipped with body cameras, two more cadets and another police officer in the past year.

Jackson also is working to fight the opioid crisis.

"In the past year, we’ve also worked with Jackson Harm Reduction and the Interfaith Shelter on policy changes to allow for a needle exchange program in the city," he said.

The programs have helped other communities in getting opioid and other drug users into treatment. They also have helped slow the spread of diseases like HIV and hepatitis C, Dobies said.

Gun violence is another public health crisis Jackson is focusing on this year.

Dobies said Jackson's crime rates are at a 29-year low, but he knows people don't think that it is.

"Nobody probably knows that more than Jennifer Johnson. Jennifer works nights helping to clean city hall. I frequently hold the elevator for her friendly, smiling face. I spoke with her at a recent neighborhood meeting in the 3rd Ward. Last fall, Jennifer’s son Demetrius was gunned
down in front of her house. He died in her arms, leaving four kids behind," Dobies said.

He said her story reminds him and City Council that action is needed to prevent more gun violence in the city.

City Councilwoman Kelsey Heck is going to lead a Gun Violence Task Force to tackle the issues facing her ward.

Dobies said the Jackson Amtrak Station is the longest continually operating station in the U.S. It needs attention in order to become a transportation hub, as is intended.

Roads are being fixed or redone in the city, with all 155 miles of roads and curbing, as well as sidewalks being accessible to people with disabilities.

He proposes fixing all of Jackson's roads over the next 20 years.

"City Council is putting these issues in front of voters on a November ballot because it’s time for us to get our neighborhood streets fixed."

Lighting is another issue Jackson will tackle, Dobies said. The city will work on lighting in Loomis and Echange parks, as well as many street lights.

Dobies wants the city to focus on attracting new business and develop entrepreneurship in the city.

Many businesses have opened in the city, including a burger and shake joint, a vodka startup and Ogma Brewery.

Dobies said there will be future incubators in the city, as well.

He said voters wanted Jackson to opt into the recreational and medical marijuana industry, so it did.
____

Dobies says the city should pass a 'fair chance' policy to help people with criminal records get a fair opportunity to get housing and employment, which would help them re-integrate into society and reduce the likelihood that they would commit more crimes.
____

"Subsidized housing doesn't have to mean substandard housing," he said.

"Nobody should pay a high price for low standards."

Poverty: About 36% of people in Jackson live in poverty. That's more than twice than the surrounding suburbs and twice the amount in Michigan.

There will be a poverty summit this summer to find resources and policies that can help in combating poverty.

Dobies says he wants his administration and the city to focus on being inclusive and diverse.

"We must recognize the disparities that exist in our city between black and white, between rich and poor, and work to address it," he said.

He says the city has improved since the inaugural address, and it's thanks to the community as a whole.

“We have a very diverse community, people of all racial and socioeconomic backgrounds, and that’s also reflected on City Council itself. And it’s incumbent on us to truly represent all that there is in the city,” Dobies said.

Dobies says that he has three priorities for the city: Security, safety and health.