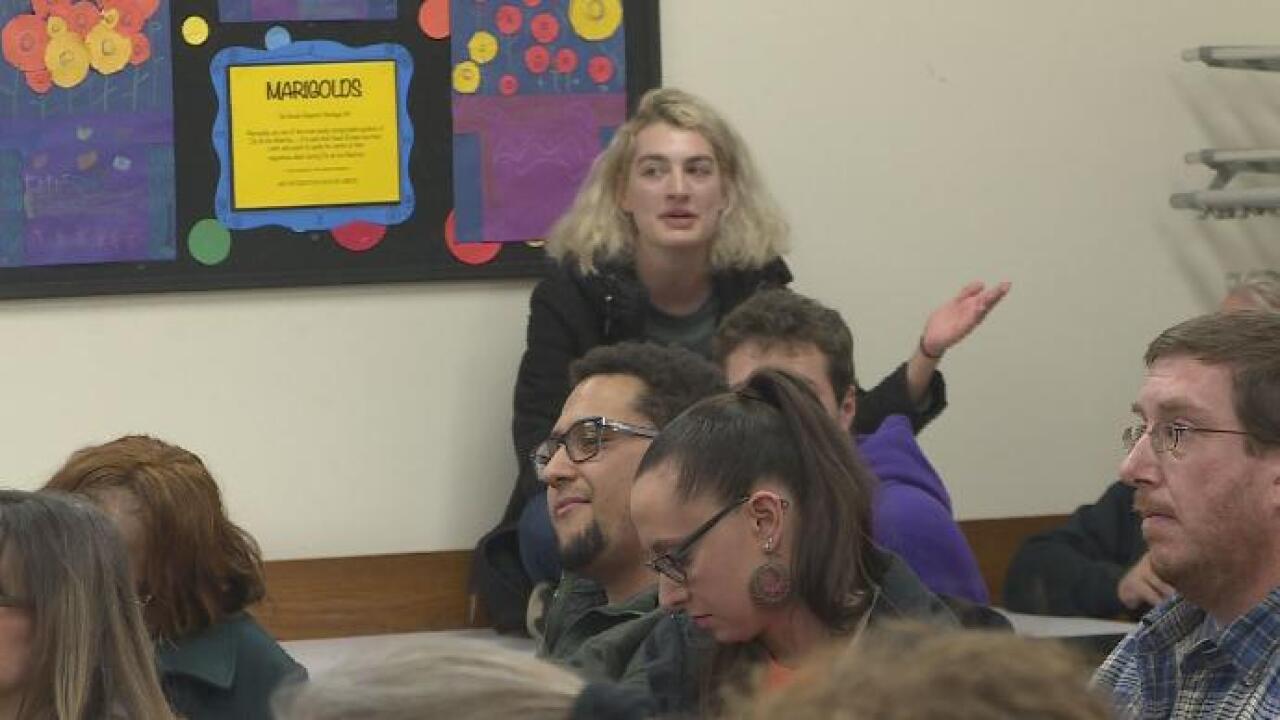 LANSING, Mich. — "To be blunt, it's absurd. If you know this coming in, its either a level of incompetence or not caring. Maybe a mixture of both who knows?"

Those are the words of Curtis Vaden, a man who attended the first "input session" hosted by the Michigan Association of School Boards (MASB) to get public input on the search for a new superintendent of Lansing Schools.

Many people came to the meeting to voice their concerns about the front-runner for the job, acting superintendent Mark Coscarella.

People there were beyond upset by the allegations against Coscarella, some even interrupting the meeting to speak out.

That's just one of the outbursts from the crowd during tonight's meeting. Anger, frustration, and confusion just some of the emotions people felt about the search.

"I am deeply concerned about the current acting superintendent," attendee Debbie Nolan said standing up to address the people there. "I am requesting a thorough and publicly-reported out investigation."

After a few minutes, the meeting was back on track. The Michigan Association of School Boards, which led the forum, asked people to list qualities they were hoping to have in a new superintendent on Post-Its. One of them read "does not have a history of locking a co-worker in a room and stripping." A reference to a police report made by a former student teacher of Coscarella's, saying he locked her in his room, stripped to his underwear, and danced.

"For me, I think it's so important to hear things in people's voices and the emotion of it and hear what people had to say. So I came here expecting everyone would get a bit of time, two or three minutes, to say how the felt," Nolan explained.

But MASB wasn't surprised by the feelings attendees expressed and their outbursts.

"I think community members care a lot about this district and it's not surprising that people came in and had strong feelings. They were able to have a space to share that and I think we were still able to facilitate our session, go through our process and get the information for the board that we needed," Greg Sieszputowski of MASB said.

People who showed up wanted their voices heard, and that's exactly what they did. They're hoping Lansing Schools will open the search, and think twice about who they are putting in the district's top spot.

"We're better than this. What if all candidates who came to us as superintendent had some type of blemish like this on their record? It would not be acceptable, none of them would be acceptable," Nolan said.

"I don't think it starts with one person, its a group of people making decisions. They have to check themselves, they're the ones that have to go home and look in the mirror," Vaden added.

FOX 47 News reached out to Lansing Schools for comment. They declined to say anything about Wednesday's meeting.

Coscarella denies the allegations of sexual misconduct and denies he supplied the pornography to students. But he did admit last month in an interview with News 10 that he "would do things differently" when it comes to the incident.

Lansing School District will hold a board meeting Thursday night, FOX 47's Megan Hiler will be there and bring you the latest on the search.

The Michigan Association of School Boards will take all of the input gathered at the meeting to the school board, which will make the final decision.

You can voice your opinion by filling out a survey or going to the next meeting this coming Tuesday.

For more information on the search from MASB, click here.