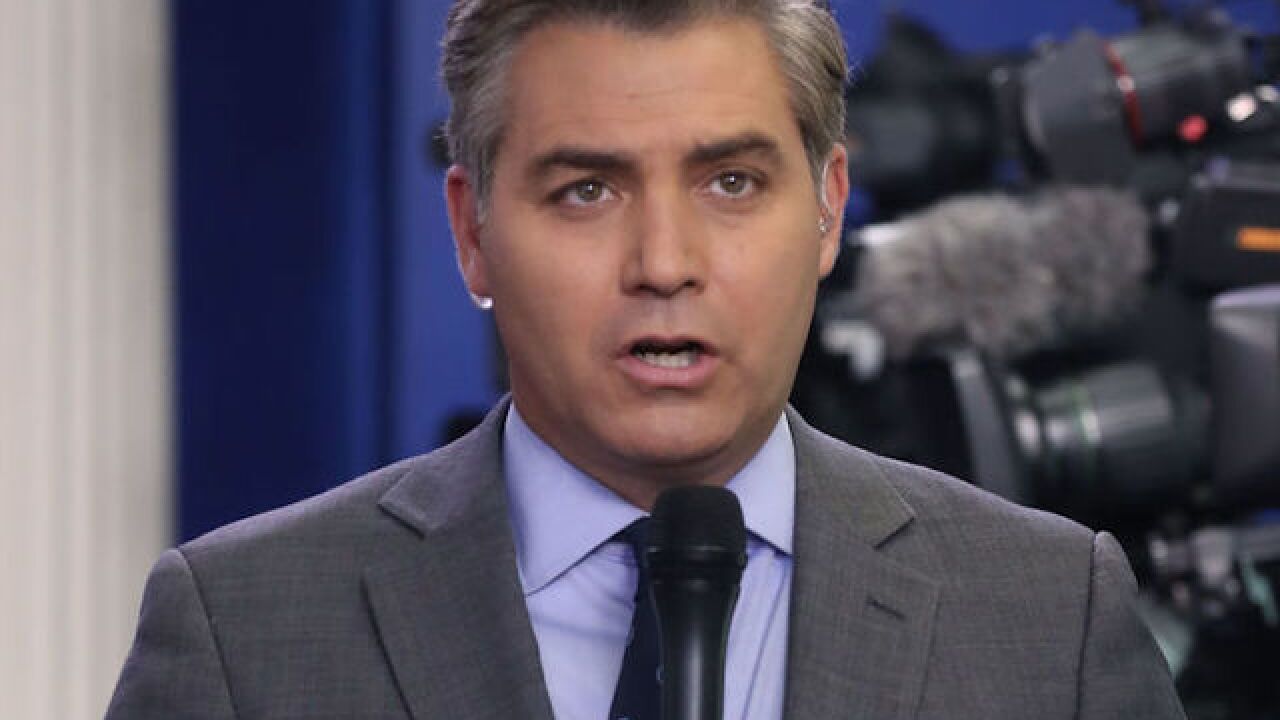 Image copyright 2018 Getty Images. All rights reserved. This material may not be published, broadcast, rewritten, or redistributed.
Mark Wilson
<p>Jim Acosta on August 2, 2018 in Washington, DC.</p>

CNN White House reporter Jim Acosta said on Wednesday that he was denied access to the White House on Wednesday evening, following a contentious news conference when he sparred with President Donald Trump.  White House Press Secretary Sarah Huckabee Sanders confirmed the White House has removed Acosta's hard pass, which allows journalists access to the White House grounds. Sanders said that Acosta's credential has been revoked until further notice.  Earlier on Wednesday, Acosta was scolded by Trump for continuing a tough line of questioning.  "CNN should be ashamed of itself having you working for them," Trump said. "You're a very rude person. The way you treat Sarah Huckabee Sanders is horrible. You shouldn't treat people that way." Acosta questioned the President about his rhetoric surrounding a migrant caravan that is traveling on foot to the United States. While trying to ask a follow-up question, Trump repeatedly told Acosta he was moving on. At that point, a White House staffer attempted to take the microphone out of Acosta's hands. Acosta made several attempts to pose the follow-up question to Trump before finally allowing the White House staffer to take the microphone. Sanders claimed that Acosta placed his hands on the staffer while trying to hold onto the microphone.

President Trump believes in a free press and expects and welcomes tough questions of him and his Administration. We will, however, never tolerate a reporter placing his hands on a young woman just trying to do her job as a White House intern...

CNN responded by saying it fully supports Acosta.  "She provided fraudulent accusations and cited an incident that never happened," CNN said in a statement. "This unprecedented decision is a threat to our democracy and the country deserves better. Jim Acosta has our full support." Here is the exchange in its entirety:

The US Secret Service just asked for my credential to enter the WH. As I told the officer, I don’t blame him. I know he’s just doing his job. (Sorry this video is not rightside up) pic.twitter.com/juQeuj3B9R

Acosta recorded the moment that the Secret Service took his credential. The US Secret Service just asked for my credential to enter the WH. As I told the officer, I don’t blame him. I know he’s just doing his job. (Sorry this video is not rightside up) pic.twitter.com/juQeuj3B9R — Jim Acosta (@Acosta) November 8, 2018 Here is CNN's full statement following Wednesday's incident: Tonight the White House revoked @Acosta’s press pass. CNN’s response to @PressSec and @realDonaldTrump: pic.twitter.com/EY2iFLvP3P — CNN Communications (@CNNPR) November 8, 2018