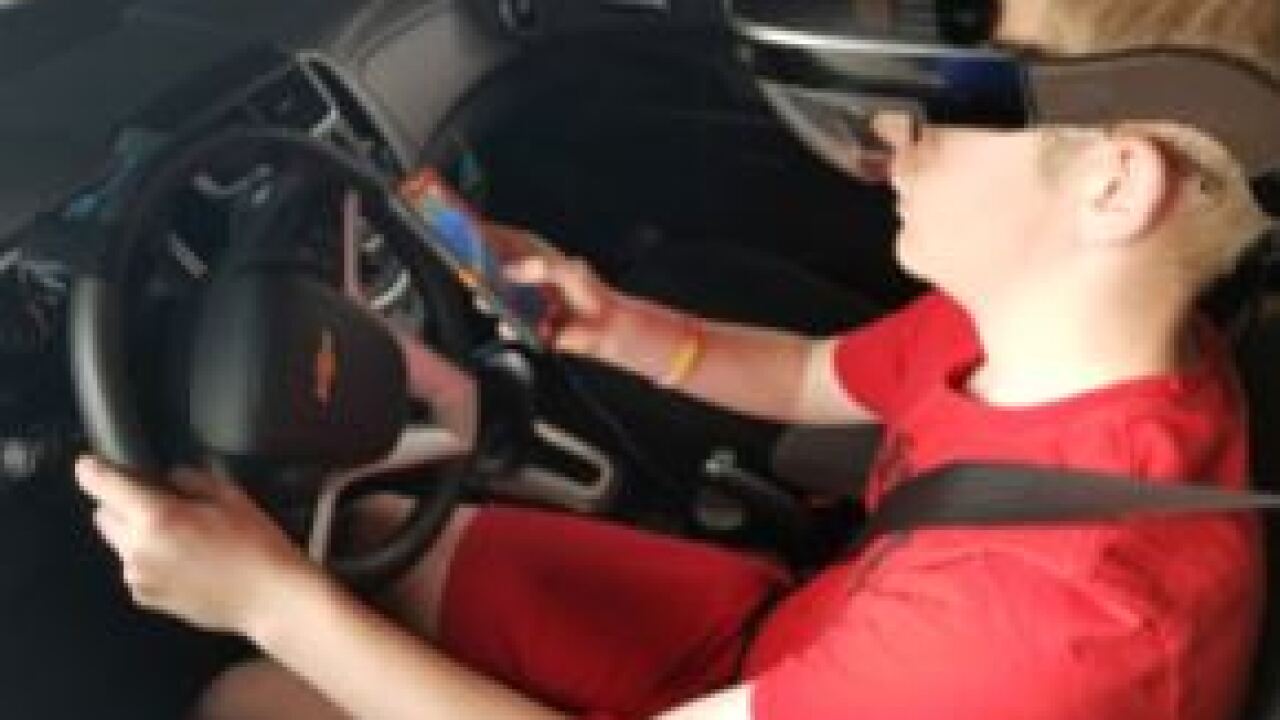 This safe, augmented reality environment exposes users to to the dangers of distractions such as phone calls, texting, and social media use while driving to educate teens about vehicle and roadway safety.

In 2018, General Motors partnered with the PEERS Foundation to provide 50 high schools within the Southeast region of Michigan with ARDDES. Each student to experience the simulator took pre and post surveys of the event. In a cumulative report for all 50 schools, 8,031 students were directly impacted from the simulator and an astounding 89% of students agreed to eliminate distractions after “driving” with ARDDES. The simulator has proved lasting effects through 30 and 60 day follow up surveys that were conducted. 85% of the students continued to practice safe driving without distractions 30 days after going through the simulator and after the 60 day survey, 83% of students were still strongly impacted.

With the success of the first 50 schools visited, Together, the PEERS Foundation and General Motors will expand the efforts to eliminate distracted driving by nearly doubling schools visited in Michigan to 86 in 2019.

Participants in ARDDES simulations sit in the driver's seat of an immobile GM vehicle with key function features including the steering wheel, turn signals and pedals while wearing a Meta2 head-mounted augmented reality display that presents them with realistic scenarios. Similar to real life, ARDDES drivers must make quick decisions regarding traffic, pedestrians, passengers and cell phones in order to avoid potential collisions.

The PEERS Foundation is a non-profit organization that was founded on the idea of empowering and educating youth through the power of knowledge. In 2008 they saw the rising trend of distracted driving among young drivers and responded by executing 2,761 events where over 1.1 million teens were educated on the dangers of distracted driving.

This mission was furthered by General Motors’ investment in the organization through its vehicle and roadway safety giving pillar to create a more interactive experience to educate young drivers on the dangers of distracted driving.

“As we envision a future with zero crashes, we must first help increase safe practices in and around vehicles. The work GM is doing with the PEERS Foundation to educate young drivers about the dangers of driving distractions in a safe learning environment is a great example of something that will get us to that future,” said Terry Rhadigan, executive director, GM corporate giving.

The PEERS Foundation also partnered with augmented reality developers, Gravity Jack. Gravity Jack was the top choice for PEERS due to their experience completing similar projects for Intel Corporation and the United States Department of Defense.

“The incorporation of augmented reality into our ARDDES simulator will change the way interactive educational and driving simulation will be done in the future,” said Michael Seymore, Chairman of the PEERS Foundation Board.

ABOUT PEERS FOUNDATION
Founded in 2008, the PEERS Foundation is a 501(c)(3) non-profit organization that seeks to empower young people with the knowledge necessary to build healthy, successful lives by using innovative and interactive learning interventions in Distracted Driving Prevention and STEM Education. Michael Seymore, Founder, and CEO of CEP Inc., a leading provider of campus entertainment for colleges, formed the PEERS Foundation to bring these educational programs to young people throughout the United States. CEP Inc.s' years of experience in event design, construction, booking, management, and execution provide the solid base for the PEERS Foundations' successes in educating today's youth.

ABOUT GENERAL MOTORS
General Motors Co. (NYSE:GM) has leadership positions in the world's largest and fastest-growing automotive markets. GM, its subsidiaries and joint venture entities sell vehicles under the Chevrolet, Cadillac, Baojun, Buick, GMC, Holden, Jiefang, and Wuling brands. More information on the company and its subsidiaries, including OnStar, a global leader in vehicle safety, security and information services, can be found at http://www.gm.com