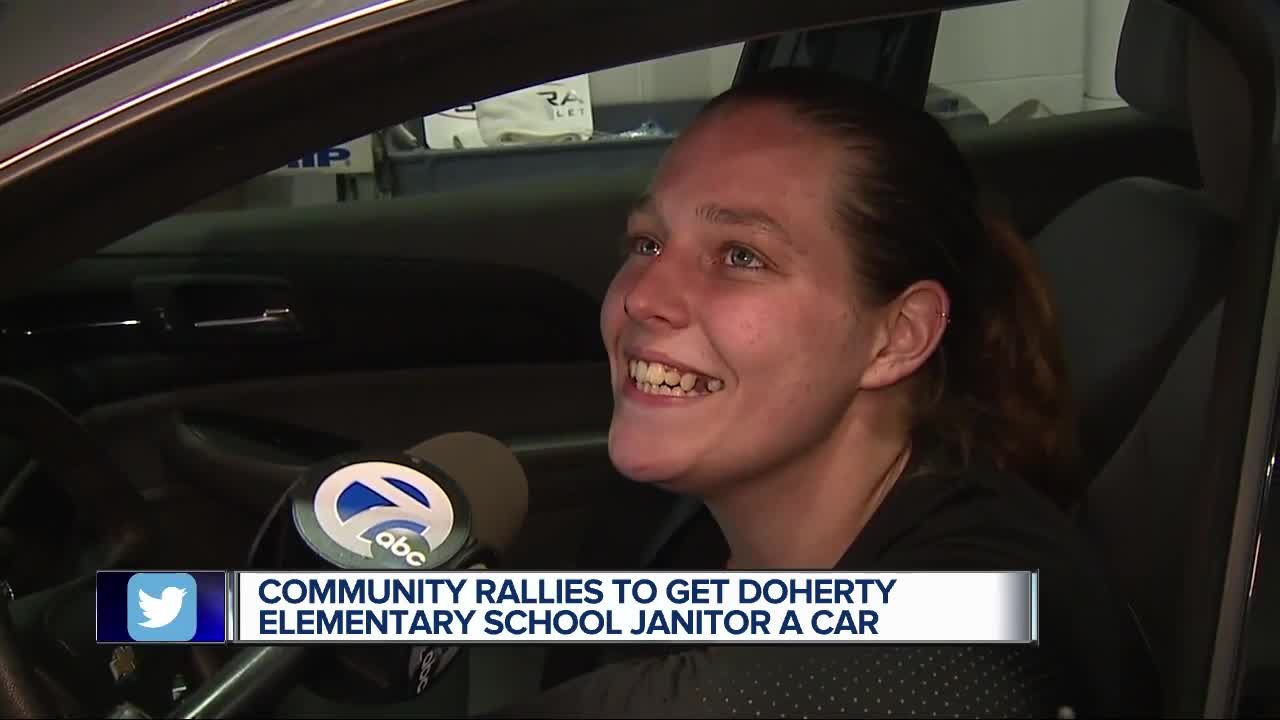 Doherty Elementary school came through for one of their own. On Monday, the school and Serra Chevrolet of Southfield teamed up to give the school janitor a car after our story first aired back in June.

Doherty Elementary school came through for one of their own. On Monday, the school and Serra Chevrolet of Southfield teamed up to give the school janitor a car after our story first aired back in June .

Andrea Smith is the janitor at Doherty Elementary School in West Bloomfield. For a year she walked more than 10 miles each way to and from her home in Pontiac just to get to work. Now, Smith no longer needs to walk to work because she has a new car thanks to her family at Doherty Elementary.

Action News reporter and anchor Alan Campbell first met Smith in early June. She told him about her struggles getting to and from work and not having enough time with her kids.

This is AMAZING!! Andrea Smith is a janitor at Doherty elementary. She walked to her job 9 miles a day through rain and snow for a full year. Now her Doherty elementary family surprised her with a car from @SerraChevrolet in Southfield pic.twitter.com/BBYVvQWcW6

"It would be a lot less stressful having to worry about how to get back and forth to work everyday," she said. "Trying to be up at 3 in the morning trying to walk."

The faculty at Doherty knew they had to help Smith, so they started a GoFundMe that quickly grew after our story aired. It even caught the eye of Serra Chevrolet of Southfield.

"I called the school. I got a hold of Scott, I said I’m Greg I’m with Serra Chevrolet, we’d like to donate and we’d like to be part of the go fund me," said General Manager Greg Brown. "I told him the amount we’d like to contribute and his first thing was, we need to get her a car and I said well that’s what I can help with too."

In just over a month and a half, the GoFundMe page raised more than $8,000. Serra Chevrolet would add more than $3,000 to that amount.

Smith is ecstatic about her new ride and the generosity of so many people who made this all happen, including the teachers at Doherty Elementary.

"We’re just thrilled that we can do this for her and that she has a safe and reliable way to come to work and she’s an important party of our Doherty family," said teacher Nancy Goldstein.

With her new car and that new car smell, Smith doesn’t need to worry about walking or biking anymore. Now, she has a reliable vehicle and more importantly she’ll now have more time with her children.

"They did it for me and I feel really grateful and appreciate everything they done for me," Smith said.

She added that she can’t wait for the first day of school when she can drive her new car and show it off to all the people who made this moment so special for her.