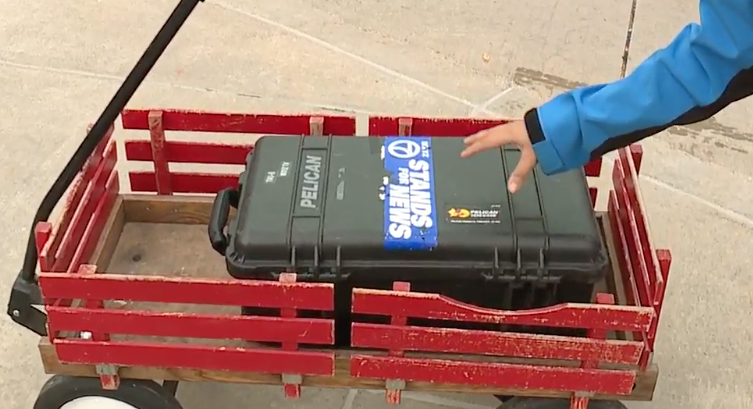 A viral video shows a WXYZ photographer with equipment, not a box of ballots. How to stop the spread of misinformation.

One of the biggest challenges of this election is fighting the spread of misinformation — and it even hit us close to home.

A viral video shows a man wheeling a wagon into the TCF Center in Detroit. The woman recording insinuated there may be a ballot box in the wagon, long after absentee ballots should have arrived. But that man was a WXYZ-TV videographer just doing his job. He was wheeling in equipment to our crew stationed there for coverage.

A conservative “news” site reports catching a man wheeling in “suspicious” equipment to the Detroit convention center, implying it was used to steal ballots.

The “ballot thief” was my photographer. He was bringing down equipment for our 12-hour shift. https://t.co/4UsRdOncZ3

The video appeared on the website Texas Scorecard, which describes itself as "Relentlessly pro-citizen, unabashedly pro-liberty."

The website said the video was taken by Kellye SoRelle, a Texas lawyer.

It was also played on a YouTube show for Steven Crowder, a Conservative media figure.

“A lot of our social media are really designed to show us the things that we want to see. And so because of that, they create what Cass Sunstein has famously called 'filter bubbles,' which is just an idea that the algorithms behind your Facebook or your Twitter show you the information of people who think like you," said Jonathan Carter, assistant professor of political communication at Eastern Michigan University.

While some big tech companies have made efforts recently to try and flag information that’s without context or suspicious, it hasn’t stopped things like this wagon video from taking off.

He also noted that the stress surrounding the 2020 election has made things feel more intense.

“We’ve had some political candidates kind of priming messages that this is going to be corrupt or unfair even though there is no evidence to that fact,” Carter said.

He also mentioned COVID and the need for counting large amounts of absentee ballots.

To protect yourself, Carter said it may be good to talk to a neighbor of friend. He mentioned that people tend to trust those they know personally and encourages people to have one-on-one conversations.