Here are the podium positions for the CNN debates in Detroit 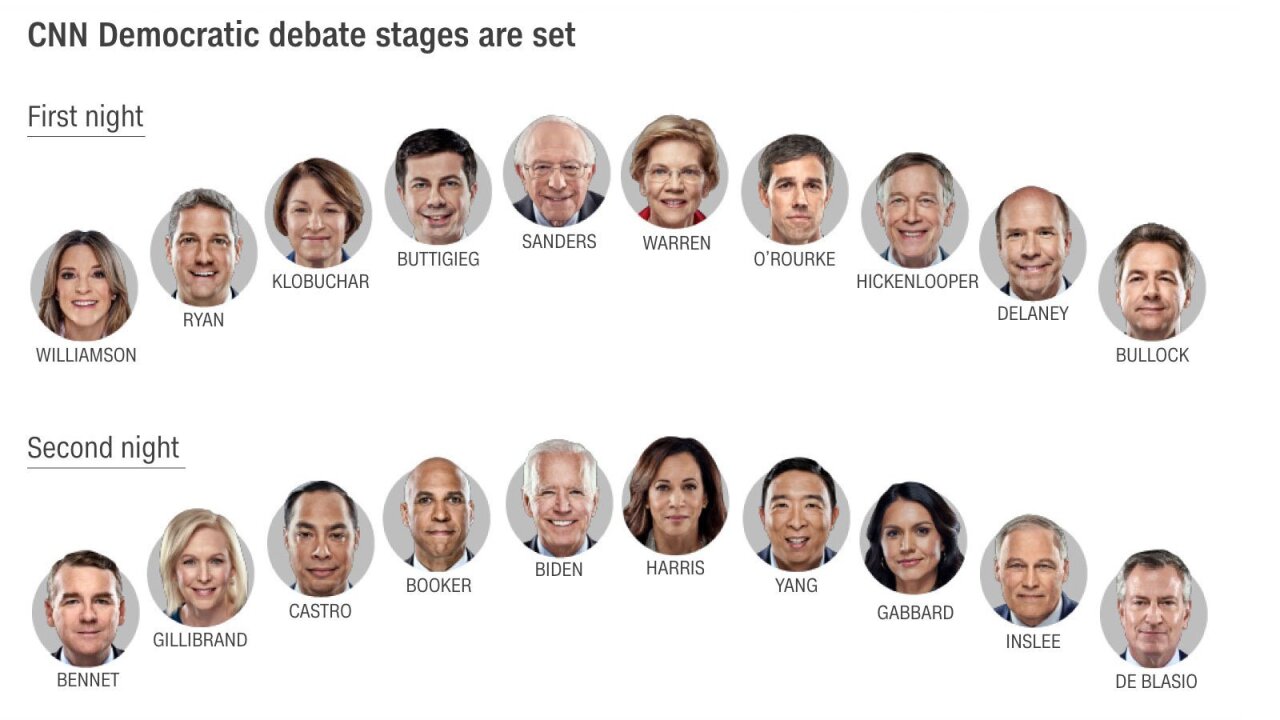 CNN's two-night Democratic primary debate will offer a rematch of former Vice President Joe Biden and California Sen. Kamala Harris , whose clash over race became the most closely watched moment of the first round of debates. Biden and Harris will debate in Detroit on Wednesday, July 31.

The match-ups mean Biden, much like the first debate , will be the center of attention, drawing fire not only from Harris, but also from Booker, who has also shown a willingness to slam the former vice president for comments he made about his ability to be civil and work with segregationist senators.

The debates will also, for the first time, offer a match-up between Massachusetts Sen. Elizabeth Warren and Vermont Sen. Bernie Sanders, the two top progressives in the Democratic primary. The duo -- who will debate on Tuesday, July 30 -- were not on the same stage during the first debate.

On July 30, these candidates will be on stage:

On July 31, the candidates who will debate are:

Though the dynamics of the race are remarkably fluid, the draw leaves Sanders and Biden missing an opportunity to confront each other. That's in part because they will again be separated from each other. Both seem to be relishing their ongoing clash over health care, but they won't have a chance to duke it out on the debate stage and grab the headlines they both want.

For Biden, a rematch with Harris risks another long conversation about his complicated record on race. Booker, too, will likely see an opportunity to hit Biden over his past comments about working with segregationist senators.

But for Biden, it could be an opportunity to make a strong showing after a shaky first debate performance.

The first night's debate will feature most of the Democratic field's moderate voices -- alongside Sanders and Warren, the race's two top progressive candidates.

Delaney, Hickenlooper, Ryan, Bullock and Klobuchar are all more moderate the most candidates running for President. And the fact that Warren and Sanders will also be stage on Tuesday night gives each candidate a chance to burnish the moderate credibility by attacking a top progressive.

The mix of moderates and progressives give candidates like Buttigieg and O'Rourke -- two candidates further left than most, but not as far left as Sanders and Warren -- a chance to prove themselves to progressive voters.

Sanders will appear with his friend and ally Warren, who could very well play up their agreements and leave it to viewers to decide who they believe is a more imposing general election prospect. The lower polling moderates, like Hickenlooper and Delaney, will likely spend the night strafing Sanders over his democratic socialism.

Sanders and Warren will likely view it differently. The debate, should they play nice with each other, presents them both with a golden opportunity to talk up their progressive plans without a heavy-hitting critic like Biden there to criticize them. If it shakes out that way, it will be a good night for the left wing of the party, no matter which candidate they support.

Buttigieg and O'Rourke on the same stage also offers a unique match up.

Both younger Democrats are considered rising stars in the party, but their presidential campaigns are going in distinctly different directions: After announcing a presidential exploratory committee with little fanfare, Buttigieg raised nearly $25 million the second quarter of 2019. Compare that to O'Rourke, who raised $9.4 million in the first 18 days of his campaign but only raised $3.6 million in the second quarter.

CNN's formula guaranteed that two of the top four candidates and five of the top 10 candidates will be on the same stage. During NBC's debate, where a different drawing formula was used, Warren was the only top five candidate on the first night of debates, while Biden, Buttigieg, Harris and Sanders were all on the second night.

For many candidates, especially those in the bottom 10, this could be their final shot to make a moment on national television, given the DNC is doubling the threshold to qualify for the third and fourth Democratic primary debates later this year.

Massachusetts Rep. Seth Moulton and Miramar, Florida, Mayor Wayne Messam, two candidates who did not make the first debate stage, will also miss the second debate after failing to qualify.

Billionaire investor Tom Steyer and former Pennsylvania Rep. Joe Sestak, two candidates who recently got into the presidential contest, also failed to qualify for the second round of debates.

Candidates had until 11 a.m. ET Wednesday to certify with the DNC that they have either achieved at least 1% support in three polls from an approved list of pollsters or received campaign contributions from 65,000 unique donors, including 200 donors each from 20 different states.

In order to qualify for the third and fourth set of debates in September and October respectively, candidates will now have to achieve 2% in four polls from a slightly changed list of approved pollsters and receive 130,000 unique donors (from the date of their campaign's creation), including 400 unique donors per state in at least 20 US states.