A list of projects included in the new $3.5 billion bonding program aiming to rebuild roads in Michigan has been released Thursday by transportation officials.

A list of projects included in the new $3.5 billion bonding program aiming to rebuild roads in Michigan has been released Thursday by transportation officials.

Gov. Gretchen Whitmer announced in late January that Michigan will borrow $3.5 billion to rebuild the state's deteriorating highways and bridges over five years, calling it a fiscally responsible move after the Republican-led Legislature rejected her proposed fuel tax hike.

The Democrat unveiled the bonding plan during her second annual State of the State speech to lawmakers. It will enable the state Department of Transportation to do about twice as much construction on I-, U.S.- and M-numbered routes as it can now, she said. The funds would not be used to repair local roads.

The State Transportation Commission authorized the sale of $3.5 billion in road and bridge building bonds. The Commission voted 6-0 to authorize the Michigan Department of Transportation to sell the bonds for 49 projects, which include completely rebuilding essential state-owned freeways and bridges.

"I'm going to use the power of my office to do what I said I was going to do — because for me, for Michigan, impatience is a virtue. No more waiting around to fix our roads," Whitmer said during her address at the Capitol. 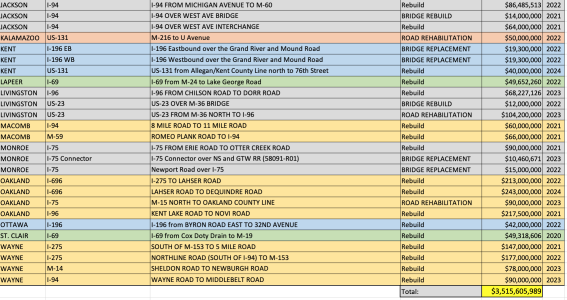