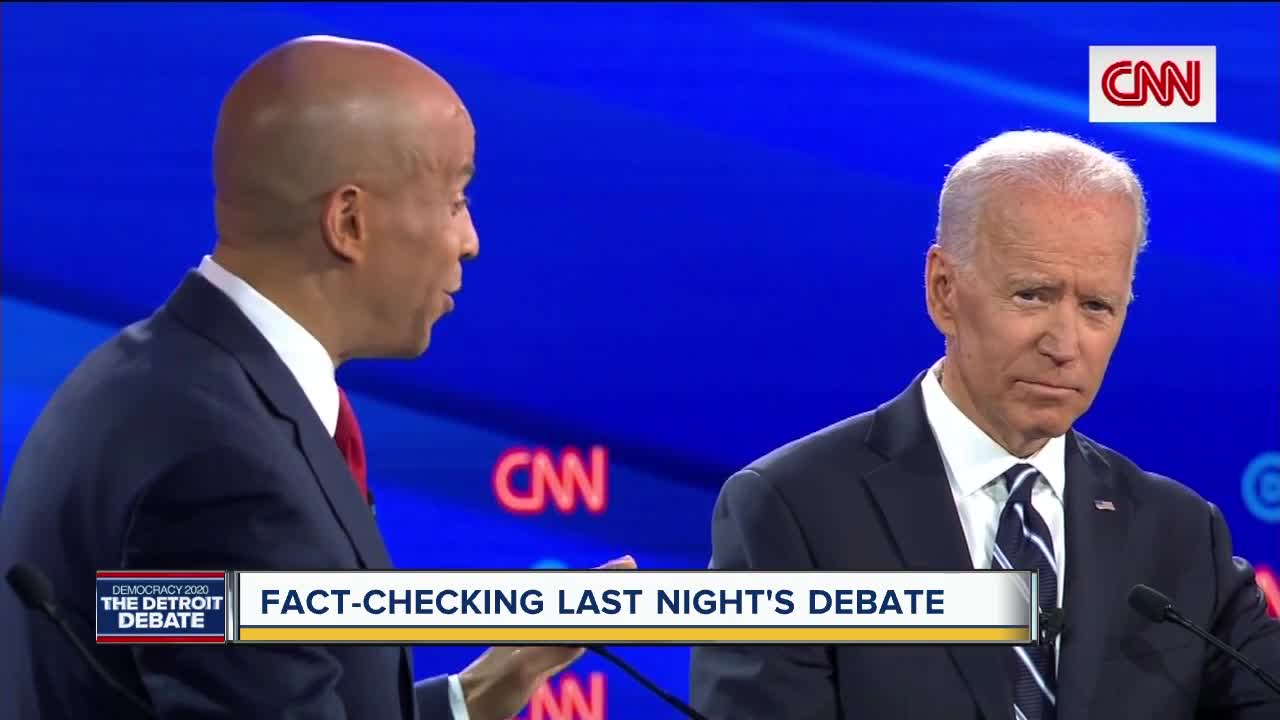 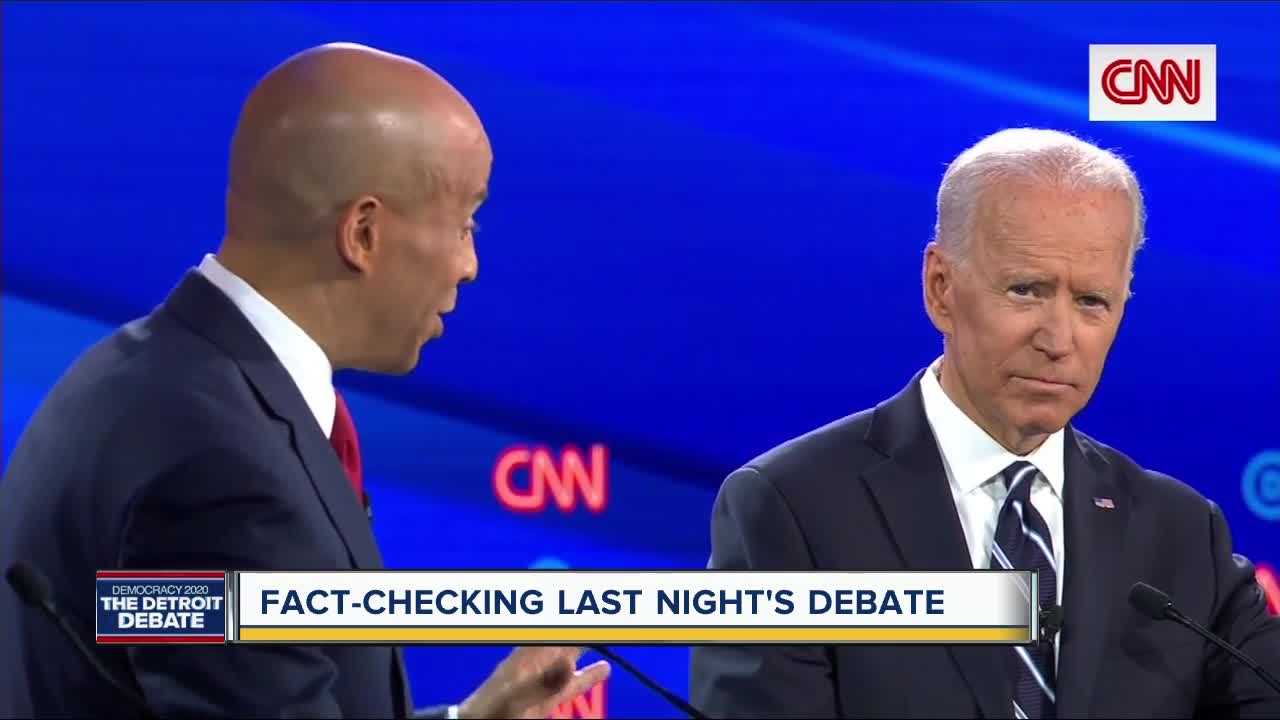 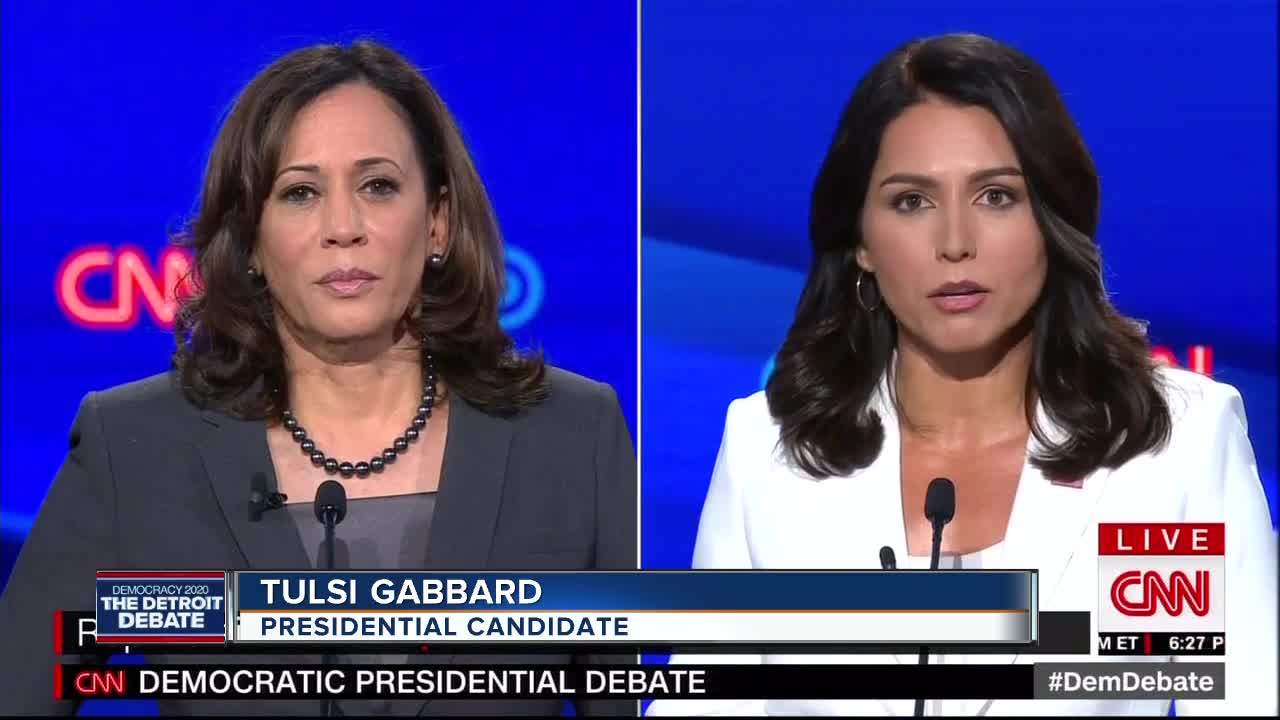 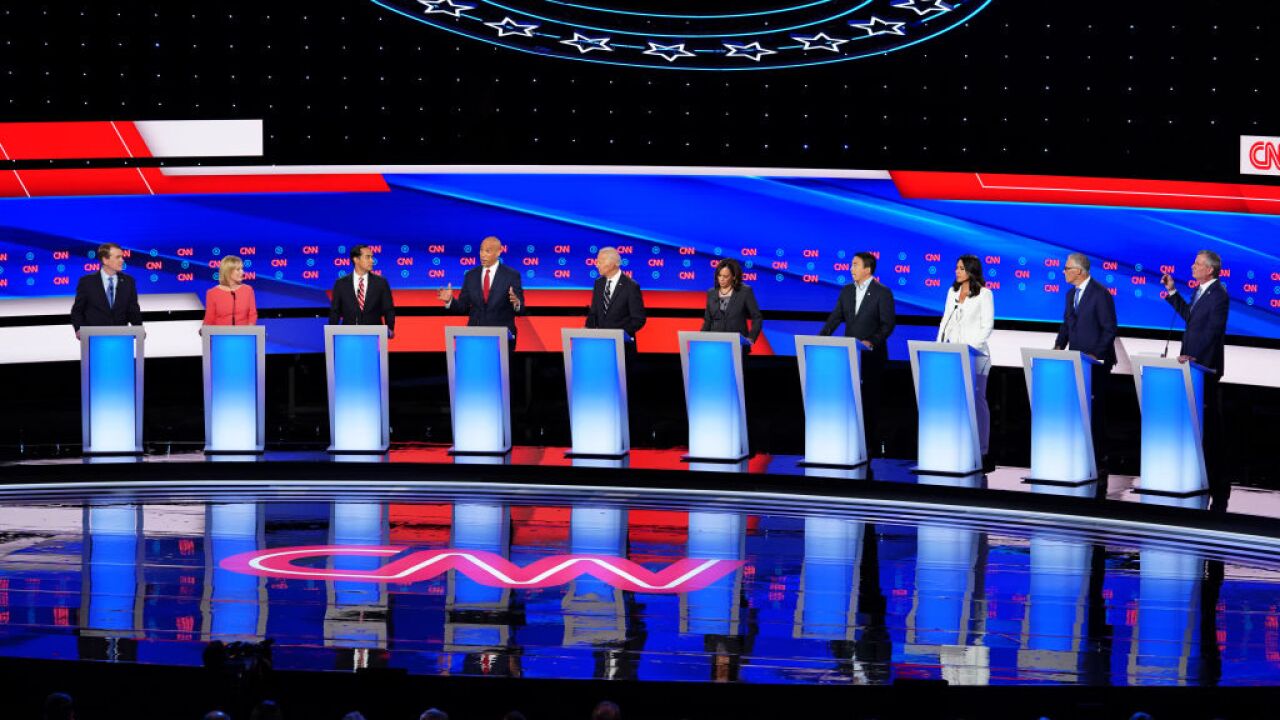 The Facts First team is spending the night fact-checking candidates' claims from the stage in Detroit .

Tonight's lineup features front-runner, former vice president Joe Biden , as well as Sen. Kamala Harris of California , who went after Biden in the last debate over his past record on mandatory busing . It also includes Sen. Cory Booker of New Jersey , who has attacked Biden over the issue of race .

The debate has had heated exchanges over health care, immigration and criminal justice among other topics.

Here are the facts.

Facts First: Yang is right that robots have displaced more workers than immigrants.

Many studies have shown that immigrants generally create more net jobs in the US, although there may be some displacement and wage stagnation in low-skilled industries where more immigrants compete directly with native-born Americans.

But all kinds of manufacturing industries in America, from steel to tractors, have incorporated technology that reduces the number of people needed to create a given amount of stuff. The automotive sector accounts for about half the US' robot shipments, according to the Robotics Industry Association, though non-automotive industries have been catching up fast. And many economists, including those at Oxford Economics and McKinsey, project that automation will displace millions of jobs in manufacturing down the line.

However, manufacturing employment in Michigan has been steadily rising since the bottom of the Great Recession, and now stands at 635,000 jobs — 14% of total employment in the state. And according to the pro-immigration American Immigration Council, in 2015, 94,152 of those jobs were occupied by immigrants, a share that was higher than immigrants' percentage of the overall population.

Former Vice President Joe Biden was the target of multiple attacks, from protesters and from others onstage, about the deportation record of President Barack Obama. Biden defended his former boss against New York Mayor Bill de Blasio by saying Obama "came up with the idea for the first time ever of dealing with the DREAMers. He put that into law."

The "DREAMers" are undocumented immigrants who were brought into the United States as children and there has long been bipartisan support to give a pathway to legal status. The DREAM Act was a bill written by Sen. Dick Durbin of Illinois. It never became law despite multiple efforts -- but the name stuck.

But there was not enough support to put it into law. And when a comprehensive immigration plan failed in congress, Obama instead used executive authority to give DREAMers temporary protection with the Deferred Action for Childhood Arrivals, or DACA, program.

If they met certain requirements, signed up for the program and stayed out of trouble, he promised they could stay in the country. But it was a temporary fix and not ever put into law.

So when Donald Trump came into office, he moved to end DACA. Trump says he supports a legal status for DREAMers, but has said Congress must pass a law giving it to them. His effort to end the DACA program is currently stalled in the courts.

So no, Obama did not put anything for the DREAMers into law. And that's part of the point of his record on immigration that frustrates immigration advocates.

Profits in the pharmaceutical and insurance industries

While criticizing former vice president Joe Biden's health care plan, California Sen. Kamala Harris said, "Let's talk about the fact that the pharmaceutical companies and the insurance companies last year alone profited $72 billion, and that is on the backs of American families."

Facts First: Harris was in fact understating the profits of these industries. Ten of the largest US-based drug companies alone made $69 billion in profits last year. Health insurance companies made $23 billion.

Not all of these profits came from the companies' operations in the United States.

A report from the National Association of Insurance Commissioners said the health insurance industry generated net earnings of $23.4 billion in 2018.

US law allowing for family separations

Several candidates criticized the Trump administration's policy of separating migrant children from their parents at the border, citing a long-standing US law that can result in such action.

Facts First: This is true -- and the law has been a flashpoint in the immigration debate.

Last year, the Trump administration implemented its controversial "zero tolerance" policy, using a section of US law to criminally prosecute all adults who illegally crossed the southern border. The policy led to the separation of thousands of families, given that children can't be held in federal jail with adults. The policy—and the section of the code at the center of it —have become a flashpoint in the immigration debate.

Democratic candidates remain divided over the law, referred to as Section 1325, with some wanting to instead make crossing the border illegally a civil offense, instead of a criminal offense.

Former HUD Secretary Julian Castro shot the issue into the national dialogue at the last round of debates and hammered in on his position Wednesday night.

"The only way that we're going to guarantee that we don't have family separations in this country again is to repeal section 1325 of the immigration nationality act," Castro said Wednesday. "That is the law that this President, this administration is using to incarcerate migrant parents and then physically separate them from their children."

Former Vice President Joe Biden added: "The fact of the matter is, when people cross the border illegally, it is illegal to do it unless they're seeking asylum. People should have to get in line. That's the problem. And the only reason this particular part of the law is being abused is because of Donald Trump. We should defeat Donald Trump and end this practice."

Biden's plan -- which builds on the Affordable Care Act by creating a government-backed health insurance option and increasing Obamacare's federal subsidies -- would insure more than an estimated 97% of Americans, according to his plan.

That means out of the population of 327 million in the country, roughly 10 million would be left without any health insurance .

However, it's unclear exactly who would be uninsured. But under Biden's plan, families buying coverage on the Obamacare exchanges would spend no more than 8.5% of their income on health insurance -- a sum that might be too pricey for some Americans.

Attacked by former Vice President Joe Biden for the high cost of her "Medicare for All," plan, California Sen. Kamala Harris said that America already spends trillions on health care.

"We are now paying $3 trillion a year for health care in America," she said. "Over the next 10 years, it's probably going to be $6 trillion."

Later on, she said that the US is on its way "in just a handful of years of literally spending 20% of our economy, one out of every $5 spent on health care."

Facts First: This is true. If anything, Harris underestimated the numbers. According to the most recent data, America spends $3.5 trillion on health care, which equates to nearly 1 in 5 dollars of total GDP.

The nation shelled out $3.5 trillion on health care in 2017, according to the most recent data available from the Centers for Medicare & Medicaid Services. That's expected to rise to nearly $6 trillion in 2027.

Democrats voting for a pathway to citizenship

Sen. Michael Bennet said that all Democrats voted to back a pathway to citizenship for 11 million people and spending $46 billion on border security.

Facts First: This is true. All Senate Democrats and 14 Republicans voted for the Senate immigration bill that passed in 2013.

Bennet was one of eight senators — four Republicans and four Democrats — who became the bipartisan group known as the "gang of eight" that hammered out an immigration compromise bill in 2013. The legislation, which included a pathway to citizenship, passed the Senate, 68-32, and Bennet is correct that all 54 Senate Democrats voted for it, along with 14 Republicans. A majority of Republicans, 32, opposed the bill.

While the bill passed the Senate, then-House Speaker John Boehner did not take it up in the Republican controlled House, and the legislation died at the end of 2014. It's not clear whether Bennet and the other senators in the 2020 presidential race could strike a similar compromise or another major immigration bill in today's Senate.

Andrew Yang said: "Raise your hand in the crowd if you've seen stores closing where you live. It is not just you. Amazon is closing 30% of America's stores and malls."

Facts First: Yang is right that up to 30% of malls may close in the next few years, but that's not all because of Amazon.

Malls have been closing fast, and will continue to do so, according to Wall Street retail analysts. A report from Credit Suisse in 2017 projected that between 20% and 25% of malls would close within five years. Cowen & Company estimated that 20% of stores in large mall chains will close, and that all class C and D malls — which comprise about 30% of the total — are at dire risk.

E-commerce has played a role in the shrinkage of brick and mortar stores, rising from less than 1% of all retail in 1999 to 10.2% now, according to the Census Bureau . Amazon comprises nearly half of online retail in the United States, according to EMarketer .

But retail has also been challenged by overcapacity, given a years-long retail boom that saw real estate developers building more malls than consumers really wanted. That bubble is now bursting, as consumer preferences have shifted away from enclosed malls. Also, many large chains — from Payless Shoes to Toys "R" Us — have slipped into bankruptcy after being acquired by private equity firms that loaded them up with debt .