Kamala Harris in Detroit: We want to make the U.S. the worldwide leader in electric vehicles 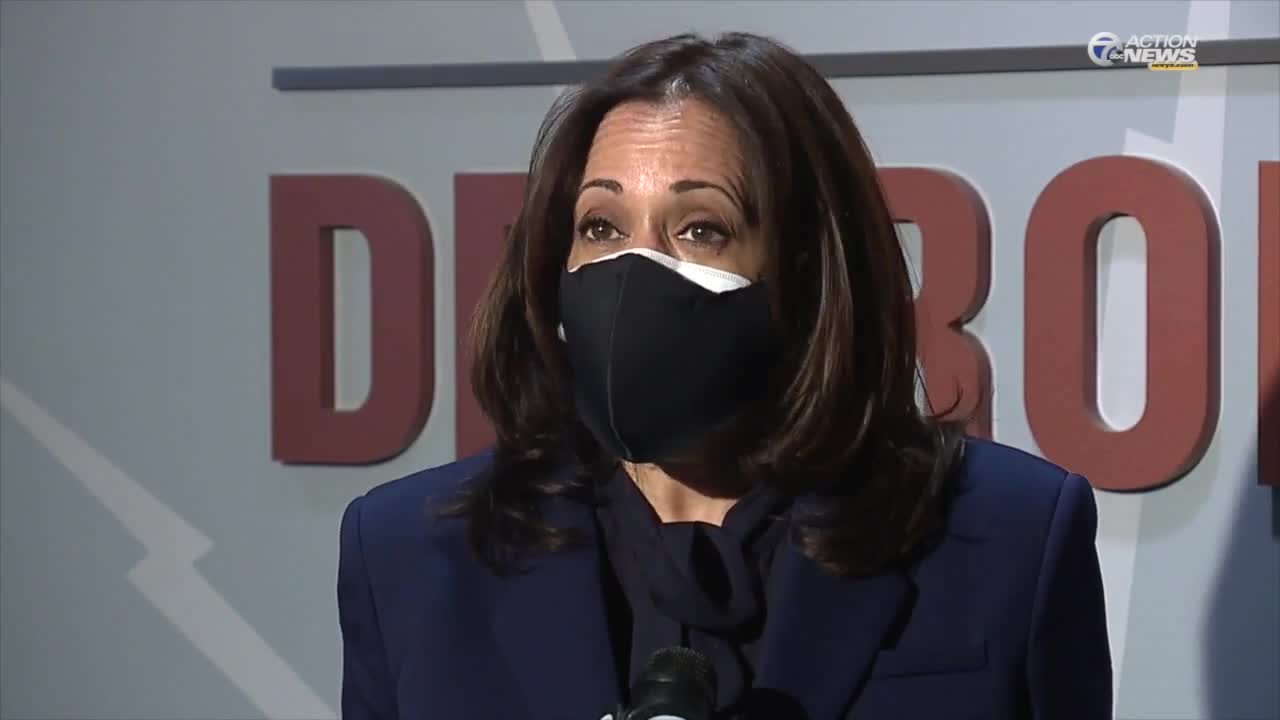 Senator Kamala Harris says Michigan is going to pave a path to the White House in 9 days.

“In Michigan, the outcome of the 2016 election was decided on an average of 2 votes per precinct. Literally every vote matters,” said Harris.

Harris made multiple stops Sunday, beginning with a drive-in church service speech at Triumph Church in Southfield before an unannounced stop at a polling location on Detroit's West Side, the speech at IBEW58, a speech to volunteers and supporters in Troy, and a Get-Out-The-Vote drive-in speech in Pontiac.

Harris responded to Sunday comments by White House Chief of Staff Mark Meadows on CNN’s State of the Union, where he appeared to signal the administration view that COVID-19 can’t be contained.

Harris called the comments an admission of the administration’s failure against the coronavirus.

“There is a clear deficit of knowledge from this administration about how serious the American people have been impacted,” said Harris.

The interview comes just 24 hours before the senate is set to take a final confirmation vote on the nomination of Amy Coney Barrett to the U.S. Supreme Court, a nomination Harris says she will vote against.

“I will be voting against her,” said Harris.

When pressed on if she believed Coney Barrett is qualified for the position, Harris responded “I believe this is an absolutely illegitimate process.”

Following a statement by Joe Biden during the final presidential debate Thursday where he said he would transition away from the oil industry, Harris worked to clarify the Biden/Harris stance Sunday.

Harris says if elected, a Biden administration will work to implement a new path forward for American auto workers through electrification.

“It is our intention to build and grow America's auto industry to be the worldwide leader of electric vehicles, and we’re going to do that through an investment.”

“Between Kamala Harris’ praise for defunding the police, support of the Green New Deal and giving taxpayer-funded health care to illegal immigrants, the contrast between Biden-Harris and President Trump’s America First Policies couldn’t be clearer. Michiganders will soundly reject Joe Biden and Kamala Harris in 9 days.”

Come election day, Harris says she believes any unrest in the country will remain civil regardless of who wins the White House.

“Let me tell you something, I believe in the American people. And regardless of who folks vote for, I believe the American people will not stand for anything that interferes with the integrity of our democracy. We take pride with a peaceful transfer of power in our country, and in this election whoever people vote for, I know they will not stand for anything less than a peaceful transition of power.”