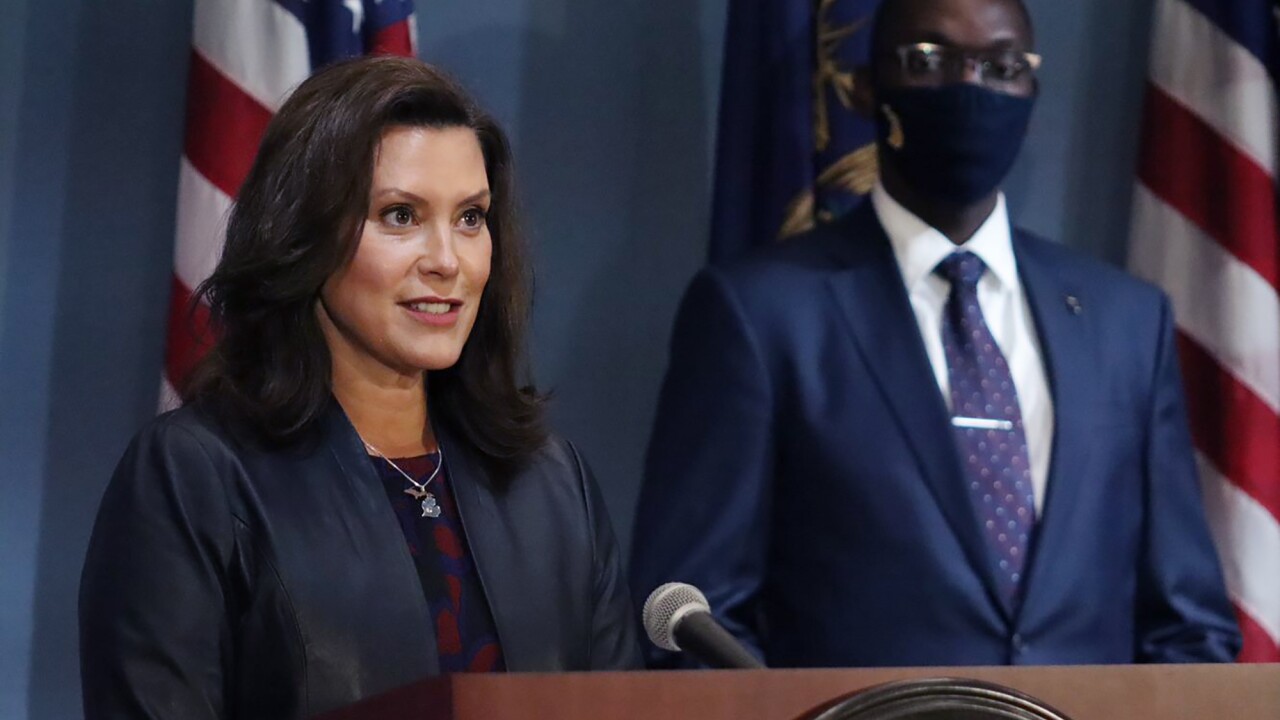 Michigan Governors Office
AP
FILE - In this Wednesday, Sept. 2, 2020 file photo provided by the Michigan Office of the Governor, Gov. Gretchen Whitmer addresses the state during a speech in Lansing, Mich. Whitmer opposes a ballot drive that would rescind a 75-year-old law that has enabled her to issue and lift COVID-19 restrictions unilaterally. (Michigan Office of the Governor via AP, File)

LANSING, Mich. (AP) — Michigan Gov. Gretchen Whitmer, faced with lawsuits challenging her use of emergency powers to fight the coronavirus, could continue to prevail in court.

But she may be unable to stop a Republican maneuver that would rescind a 75-year-old law that has enabled her to issue and lift COVID-19 restrictions unilaterally. A ballot drive said Friday it was in the “home stretch” after collecting more than 400,000 signatures in just two months. Its goal is 500,000.

If at least 340,000 signatures are deemed valid by the state elections board, the GOP-controlled Legislature would likely repeal the 1945 law rather than let it go to a 2022 public vote. The Democratic governor could not veto the initiated bill. A 1976 law, which requires legislative approval to extend a state of emergency, would remain intact.

“No one should think that allowing a politician to have unlimited power for an unlimited duration is a good idea,” said Fred Wszolek, spokesman for Unlock Michigan. He urged people to consider if they would be OK with 2018 gubernatorial candidate Bill Schuette or President Donald Trump, both Republicans, wielding emergency powers permanently with no need to consult lawmakers.

As of Aug. 3, the group had raised and spent more than $900,000 to circulate petitions. Three-quarters of the money came from Michigan Citizens for Fiscal Responsibility, a nonprofit that has ties to a GOP firm and does not have to publicly disclose its donors.

Whitmer has used the 1945 law as the underpinning for far-reaching orders to close businesses and schools, require masks and social distancing, and limit gathering sizes to control the virus that has contributed to 6,900 deaths across the state.

The public supports her handling of the pandemic, according to polling, and disapproves of how Trump has managed the crisis. The two have sparred several times. At a large campaign rally outside Saginaw on Thursday, Trump told Whitmer to “open up your state” said Michigan would be better off if it had a governor “who knew what the hell she was doing” — hours after she called him the “biggest threat” to Americans for purposely downplaying COVID-19.

Republican lawmakers initially agreed to lengthen a state of emergency through April but balked at extending the declaration again without the governor agreeing that all future stay-at-home measures would be enacted with bipartisan legislation. The Legislature sued in May, when its GOP leaders also began supporting a veto-proof initiative in case they lose in court.

She is urging people not to sign the petition. She said it would jeopardize Michigan’s progress. The state’s per-capita rate of new cases over the last two weeks ranks lower than 36 states. She has let schools and many businesses reopen since the curve was flattened, subject to safety rules.

“These are authorities that we have conferred upon our chief executive in extraordinary circumstances to keep people safe,” she said. “Each governor since 1945 has had these same powers, and I’m going to fight to make sure that every governor after me has these powers if, God forbid, they find themselves in a situation where they have to be used.”

A group, Keep Michigan Safe, formed to oppose the ballot drive. It is expected to look for flawed or duplicate signatures in an attempt to disqualify the measure. It also contends that petition gatherers are lying to potential signers about the proposal.

“This is clearly an irresponsible partisan power grab that is going to put public health at risk,” spokesman Mark Fisk said. Signing the petition, he said, will “undermine the ability of elected leaders, whether they are Democratic or Republican, and medical experts to keep families safe during the pandemic.”

The debate comes as the state prepares for a potential surge of cases in the fall and winter. If the 1945 law is rescinded, Whitmer’s ability to reimpose restrictions would be subject to legislative negotiation.

Some Republicans, like retired political strategist Bob LaBrant, oppose the initiative. He wrote an op-ed in the Detroit Free Press calling it a “threat to Michigan’s health” and saying the time to evaluate Whitmer is her 2022 reelection bid.

But Senate Majority Leader Mike Shirkey, an advocate for the petition drive, said the 1976 law is “more than adequate.” He criticized the governor’s “lingering, long-lasting actions” that “are putting unnecessary stress and pain into many, many, many unfortunate citizens and businesses.”

Republicans have long said businesses should have been able to open earlier despite the outbreak. Some, such as movie theaters, remain closed.

If legislators had a say months ago, Shirkey said, the state maybe would have “landed in a spot that was more sensible, logical and defendable.”

Unlock Michigan could turn in the signatures as soon as this month. Wszolek said it should not take the state elections bureau more than 75 days to pull a sample and verify them, so the Legislature could pass the bill in December. The timing is uncertain, though, and the process could stretch into 2021.