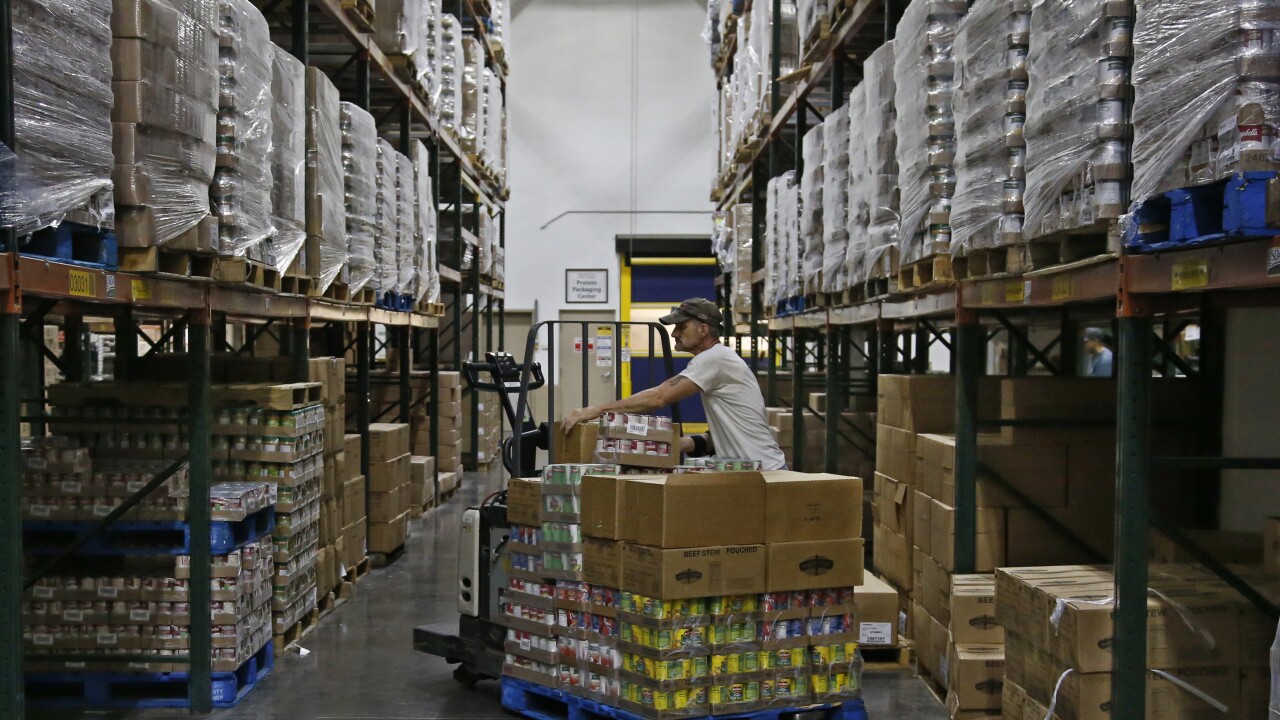 Copyright 2020 The Associated Press. All rights reserved.
Sue Ogrocki/AP
James Ambot stacks foods onto a pallet at the Regional Food Bank of Oklahoma, Thursday, April 2, 2020, in Oklahoma City. The rush on grocery stores due to COVID-19 has put a bite into the budget at the food bank, which relies mostly on donations of overstock food items to redistribute to the needy. The coronavirus outbreak has thrown 10 million Americans out of work in just two weeks, the swiftest, most stunning collapse the U.S. job market has ever witnessed, and economists warn unemployment could reach levels not seen since the Depression, as the economic damage piles up around the world. The new coronavirus causes mild or moderate symptoms for most people, but for some, especially older adults and people with existing health problems, it can cause more severe illness or death. (AP Photo/Sue Ogrocki)

Many children are no longer receiving school meals, millions of Americans are out of work, government checks are weeks away.

Feeding America, which is the largest hunger-relief organization in the United States, said on Thursday that food banks nationally are projected to encounter a $1.4 billion shortage over the next six months.

According to a Feeding America spokesperson, the organization is expecting food banks nationally to see a 30% increase in costs. That is largely because an estimated additional 17.1 million people will be experiencing food insecurity.

Adding insult to injury, food banks nationally are facing declines in donations and volunteer participation. Feeding America said it projects a 60% decline of their volunteer workforce who typically help package and deliver food, many of whom are retired senior citizens and school/corporate groups.

“The people we serve and the charitable food system in the United States are facing a ‘perfect storm,’ with surges in demand, declines in food donations and volunteers, and disruptions to normal operating procedures, as a result of the COVID-19 crisis,” said Claire Babineaux-Fontenot, CEO of Feeding America. “It is all of our neighbors who now more than ever need help putting food on their tables.”

The food bank is calling the demand "unprecedented."

"In total, through our warehouse, we distributed one million more pounds of food in March 2020 than we did in March 2019," Lisa Scales, CEO of the Greater Pittsburgh Community Food Bank, said. "We have had a 543 percent increase of people coming to the Food Bank directly for food. At the current time, our inventory is still strong, but that may change over the coming weeks.

"We have spent $1.7M in the past two months on food purchases, compared to $376,000 in that same timeframe in 2019. This is why financial contributions are most critical at this time."

The Atlanta Community Food Bank said that its spending 10 times its normal rate on food purchasing. This is in addition to no longer having nearly an army of 600 volunteers to assist the organization.