Ask Dr. Nandi: Will Moderna's COVID-19 vaccine doses be cut in half to speed up rollout? 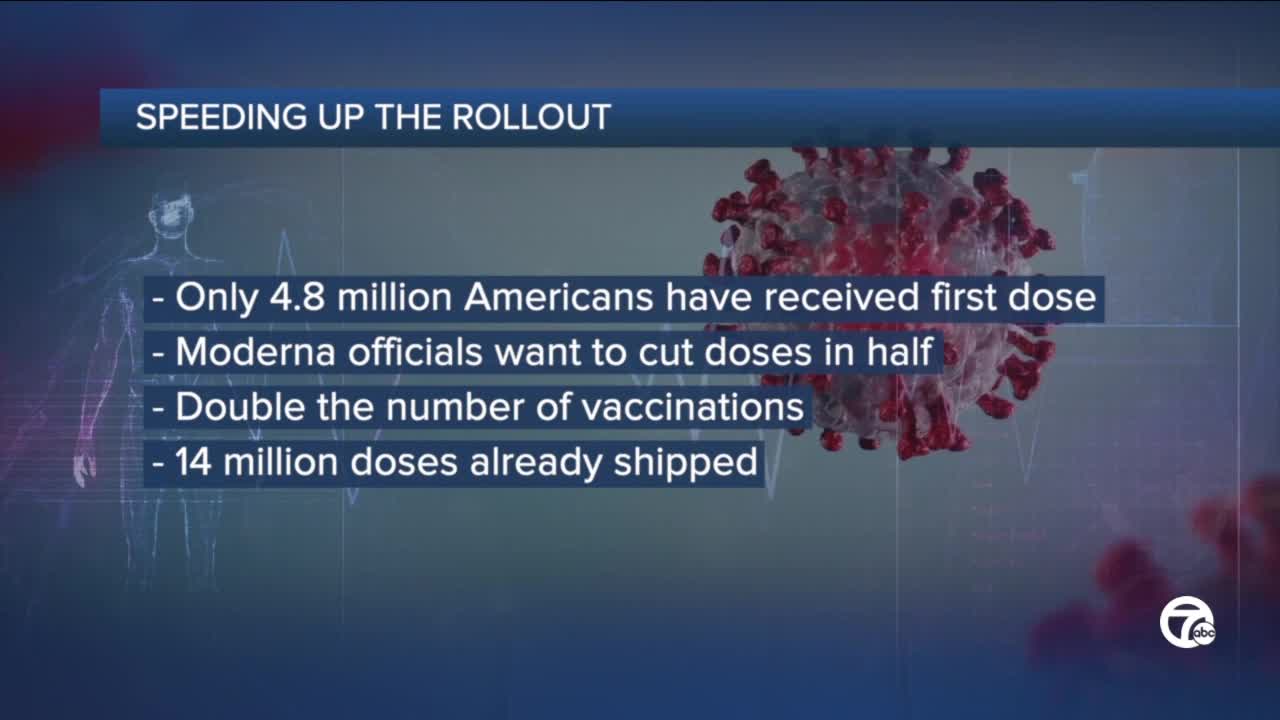 As the US struggles to get Americans vaccinated against COVID-19, some health officials are debating the idea of cutting Moderna's vaccine doses in half in order to help speed up the rollout.

(WXYZ) — As the US struggles to get Americans vaccinated against COVID-19, some health officials are debating the idea of cutting Moderna's vaccine doses in half in order to help speed up the rollout.

The suggested age group is people between the ages of 18 and 55.

Now, this idea of cutting the doses was mentioned by the Scientific Adviser of Operation Warp Speed, Mr. Moncef Slaoui. He pointed to data from Moderna’s clinical trial that supports this idea. And I do get why this has been suggested.

It’s a little frustrating that only 4.8 million Americans have received their first COVID-19 vaccine dose. So we are behind the eight-ball right now. This is why some officials want to cut Moderna’s doses – to help double the number of people who could get vaccinated.

But here’s the thing…roughly 14 million doses of both Moderna and Pfizer’s vaccines have already been shipped. So our problem is really more of a logistical issue with getting the vaccine quickly distributed and into the arms of Americans.

We know that clinical trials show that Moderna’s approved vaccine dosing regimen is highly effective. It’s two doses - each 100 micrograms – spaced four weeks apart. So what happens to the 94% efficacy rate if those doses are split into half?

Well, as I mentioned, there is some evidence that suggests half doses might be nearly as effective as full doses for people aged 18 to 55. This all sounds great, but here’s the problem. The data is based on a small subset of people in an early trial. So there really is not a lot of substantial data to support cutting doses in half. Which is why the FDA has said that it would be premature to change the approved dosing regimen because it would not be – and I quote - “rooted solidly in the available evidence”.

A single-dose vaccine would be much simpler overall. But here’s the thing with Johnson & Johnson. They have their one-dose vaccine regimen in an on-going trial right now. But they are also studying a two-dose regimen. And they’re doing that to see if a second dose might give a longer and higher protection rate.

Now, we haven’t yet heard how effective Johnson & Johnson’s single-dose vaccine is. And that’s because they recently finished enrolling about 45,000 participants into their phase-3 trial. So I expect we’ll hear about the results toward the end of February. And if all goes well, they could apply for emergency use authorization shortly after that.