Building a 'city within a city:' Behind the scenes of the CNN Democratic debate in Detroit 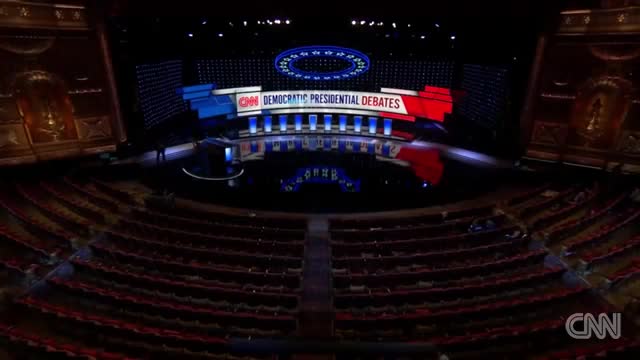 More than 20 tons of gear. Hundreds of CNN employees. The stage of a 1920s theater where Elvis Presley once performed updated for a global television audience.

More than 20 tons of gear. Hundreds of CNN employees. The stage of a 1920s theater where Elvis Presley once performed updated for a global television audience.

On screen, viewers at home will see 10 candidates -- 20 over the course of two nights -- make their case for why they should be the next President of the United States.

Behind the scenes, putting on a presidential debate is a massive undertaking -- a high-stakes production relying on the smallest of details. Producers even timed exactly how long it would take a candidate to make a trip to the bathroom.

CNN took over several blocks of Detroit, and as CNN's Washington bureau chief and senior vice president Sam Feist put it, turned it into a "small city within a city."

'City within a city'

The debate will broadcast from the ornate Fox Theatre in downtown Detroit. Stars like Aretha Franklin, The Temptations and Stevie Wonder have performed in the hall featuring gold leaf details and hand-carved wood that holds about 5,000 people.

Also on site is a filing center for the press, green rooms for the candidates, and multiple CNN sets for live programming. Much of the equipment was hauled in on multiple 53-foot trucks, said Kate Lunger, the vice president of CNN special events. Her team has been working for five months, sometimes 18 hours a day, to put it all together.

Ten candidates taking the stage each night presents an enormous challenge for the network. Only once in history has there been more than 10 presidential hopefuls on stage, Feist said, and that was at a CNN debate in 2015.

The network brought in stand-ins and actors who are about the same height as each candidate to play them in rehearsals, Feist said. With the actors in place on stage behind the podiums, every camera angle and shot can be tested and practiced, and the lighting on each person is perfected. Candidates will be entering from different sides of the stage, and their entrances have been coordinated and timed.

There are 18-wheeler trailers behind the theater that are set up as mobile television control rooms, Feist said, and "miles and miles" of cables for lighting, power, cameras and video walls. More than 700 credentialed political reporters are scheduled to attend the debate, according to Feist.

Lunger says having a record number of women candidates this election cycle has changed aspects of staging the debate. Six women running for president will participate in this week's debate, three each night, adding some new logistical considerations.

For instance, women wearing dresses can't wear microphones clipped to belts under suit jackets as men do. "There's a lot of things like that, that we're running into this campaign cycle that we haven't run into in the, in the past, which I think is fabulous," Lunger said.

To figure out how long candidates would need for a bathroom break during the more than two-hour debate, she said they got out the stopwatch. "We walk to the bathroom, we time it, and we come back."

Hillary Clinton memorably returned late to the stage from a commercial break during a Democratic presidential primary debate in 2015. The women's bathroom was farther from the stage than the men's room, and The Boston Globe reported at the time Clinton was further delayed because there was a line. Ahead of Clinton, the Globe reported, was Lis Smith, who was working for Martin O'Malley, the former Maryland governor who was running for president. Smith is now a top aide to Pete Buttigieg, the South Bend, Indiana mayor and presidential candidate who appeared on stage Tuesday.

'Backups to the backups'

Lunger, who is in charge of all of the technical and production logistics, said her biggest fear is "some sort of technical failure," she said.

The first 2020 presidential debate, hosted in Miami by NBC News, was interrupted by audio problems that forced the network to briefly suspend the second hour of debate.

"We have backups to the backups," Lunger said.

The goal, Feist said, is to make the months of preparation "invisible" to those watching at home.