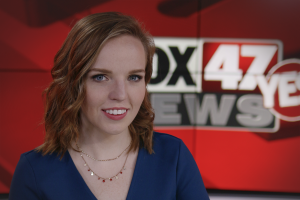 Julie was born and raised in Kalamazoo Michigan and graduated from Loyola University Chicago (of Final Four and Sister Jean fame, Go Blers!) with a degree in Journalism and a minor in Political Science.

During her time at Loyola, Julie worked with the ‘Loyola News Chicago’ news team, producing, reporting and anchoring newscasts for the student population. She also served as an R.A. for freshman and interned with WTTW, Chicago’s PBS affiliate.

After college, Julie moved up to Marquette, Michigan to work as a Reporter and Multimedia Journalist for WLUC TV6. While working as the weekend reporter, Julie was first on the scene when flood waters ripped through the city of Houghton the morning of June 17, 2018. Her reporting was featured nationally on sites like USA Today, who was also reporting on the devastation in Michigan’s Upper Peninsula.

Shortly after, Julie was promoted to the Weekend Anchor for the TV6 Late News, where she was in charge of producing, writing and anchoring entire newscasts while also reporting on stories throughout Marquette County.

Julie is a die-hard Detroit sports fan, especially when it comes to the Detroit Red Wings. She also roots for the Chicago Cubs, whose games she frequented while living in Chicago, and the Chicago Bulls. She’s a lifelong Spartans fan, with both her father and aunt having attended the university.

Julie is incredibly excited to be back in the lower peninsula and working in the Capitol. If you have a story idea, Julie wants to hear it!