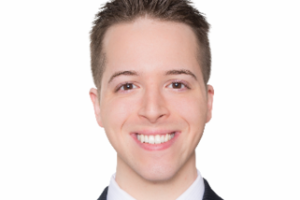 I fell in love with the weather as a child when I would sit outside in my suburban Chicago backyard and wait for the storms to arrive. I was fascinated as the clouds would thicken, the winds would pick up and change direction, the thunder would get louder, and the temperature would drop. I still enjoy watching storms approach today.

I chose a career in broadcast meteorology so that I could share my love of meteorology with a community in a way that would help them prepare for the day, whether it's sunny or rainy, and maybe teach them something about the weather along the way. Plus, it's just fun to be able to talk about the weather every day.

I earned my B.S. in meteorology from Valparaiso University in 2011. Shortly after that, I began my career in Marquette, MI at WLUC. I spent two years as weekend meteorologist where I became very familiar with Michigan's plentiful lake effect snowfall. As a weekday reporter, I managed to travel to just about every corner of the Upper Peninsula. I reported on the massive Duck Lake Wildfire, numerous blizzards and winter storms, and even interviewed Bill Nye the Science Guy.

In November 2013, I moved to Lansing to become weekend meteorologist for WILX News 10 and WSYM FOX 47. Mid-Michigan's weather is wonderfully diverse and keeps me busy all four seasons. In my time here so far, I have covered events including the Ice Storm of December 2013 and the Portland Tornado. In October of 2015, I moved to Fox 47 full-time as evening meteorologist.

Outside of work, I am an avid TV watcher and movie-goer. I also love to explore Michigan's craft beer scene.