Republicans' disgust with Trump is about money not morality 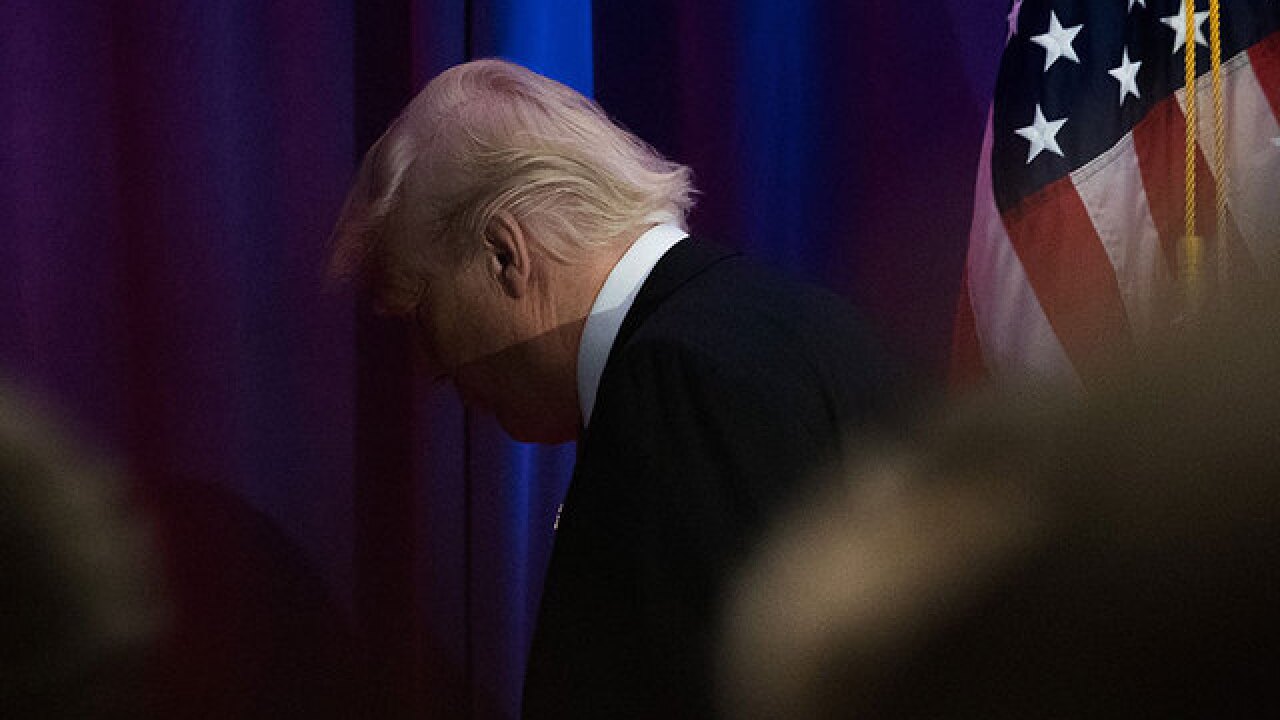 Now he’s gone and done it. A bridge too far…

Finally Republicans are fed up with Donald Trump and going public with their gripes.

Trump’s calculated, racist jihad on Muslims, his call to ban them from coming to the U.S. and hounding their communities here – that’s not the issue, not a biggie.

Picking on Mexicans and Hispanics at every stop, insulting a judge of Mexican descent who is presiding over a fraud trial against Trump University, sealing the borders with the Great Wall of Trump – Republicans can live with that, it’s just a marketing gimmick not some big moral deal.

Insulting women, calling his one female opponent ugly in one the debates, flip-flopping on abortion like a tipsy gymnast – hey, it’s part of The Donald’s charm.

Jeopardizing the GOP’s White House prospects with cavalier whimsy and outrageous escapades, threatening Republican control of the Senate – not great, true, but life goes on.

The list goes on and on and Republicans have sucked it up and fallen meekly in line.

Those days might be over. Now Trump’s messing with the gravy train. He’s threatening to cut off the lifeblood of the American elections and the two-party system – money.

Trump is balking at raising money for his campaign and the Republican National Committee. That is not cool at all. Republican Inc. cannot withstand a revenue decline like that.

The Trump campaign raised a measly $3.1 million in May and had only $1.3 million in the bank. The Donald probably has more than that in his change drawer.

Hillary Clinton raised $28 million in May and had $42 million on hand at the end of the month. Plus, a dedicated SuperPAC, as independent of the campaign as a Siamese twin, has pot loads of dough to keep the consultants, ad makers and assorted wizards fat and happy. This is how it is supposed to be done.

Adding to the injustice, Trump appears to be spending most of the campaign’s money (which I guess comes from him) on Trump businesses: $4.6 million to his private jet company so far, $423,000 to his Mar-a-Lago Club and $400 to Trump Ice LLC., purveyor of the world’s greatest bottled water.

(Brief thought experiment: Imagine if millions of dollars went from the Clinton campaign to Clinton-owned businesses; the Republican Congress would try to send her to Gitmo without a trial.)

If Trump doesn’t turn on the cash flow, it “could have a devastating impact” on the Republican Party, the consultant Austin Barbour told  The Washington Post .

“If they don’t fix this in a massive way, it’s going to have widespread implications down the ballot. It just is,” Barbour told the Post. “If he’s not raising hundreds of millions of dollars, there are gubernatorial races, Senate races, congressional races, attorney general races, you name it, that will be impacted. Those races are dependent upon get-out-the-vote efforts from the RNC and the presidential campaign.” And so are the incomes of a legion of political professionals who count on hitting the big ka-ching in presidential years.

“Trump’s fundraising is shockingly thin and has created a dark cloud over his ability to be financially competitive with the Clinton machine,” said Scott Reed, who ran Bob Dole’s presidential campaign once upon a time and now works for the U.S. Chamber of Commerce.

“I have not been asked, and I don’t know anybody in town who has been asked,” an anonymous big fundraiser told the Post, which has been on the story like a hawk. “There is absolutely no discernible presence in D.C. raising on his behalf. And I’m guessing this is not unique to D.C.”

This smells like a scandal about to explode: CheapSkateGate©.

The Clinton campaign had 683 employees on staff in May. Trump’s paid staff is reported to be around 70 people. That’s not good for the business of politics.

Trump occasionally quips that he’s perfectly able and willing to fund the whole escapade. We’ll see. But if all the dough goes to Trump Inc., there might be a complaint or two.

Republicans, with exceptions you can count with a pair of chopsticks, have willingly compromised their political philosophies, personal morality, dignity and patriotism out of loyalty to the Republican Party and its justly anointed Chieftain.

They’ve responded to Trump’s bullying and mockery like pre-pubescent, asthmatic weaklings in stories about English prep schools a hundred years ago. Yes, sir, Mr. Trump, would you like some more of my porridge.

But mess with my cut from a $10 million ad buy, well, you got a problem.