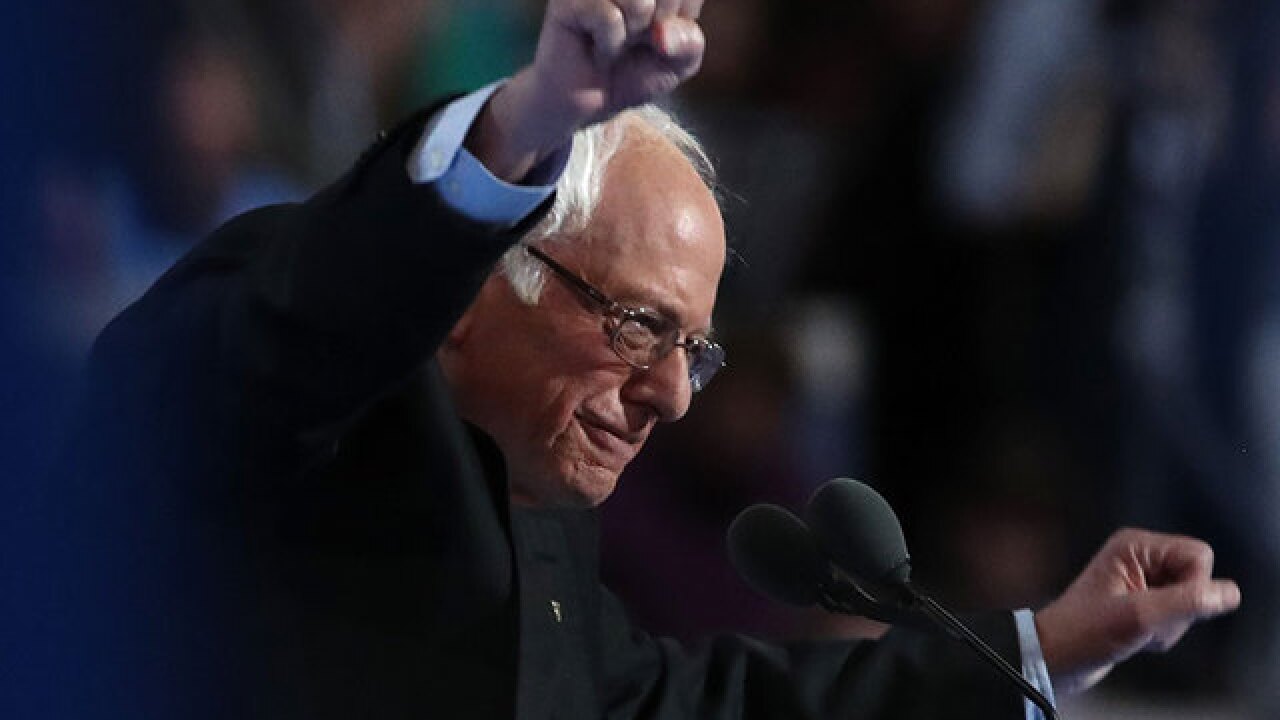 <p>Sen. Bernie Sanders, I-Vt., acknowledges the crowd before delivering remarks on the first day of the Democratic National Convention at the Wells Fargo Center, July 25, 2016, in Philadelphia, Pa. (Photo by Jessica Kourkounis/Getty Images)</p>

Bernie Sanders got a reception Monday evening at the Democratic National Convention that was defined by repeated applause, cheers, chants and tears. His speech came at the end of a day in which he'd already been the center of attention.

The night was supposed to be a moment for Democratic Party unity: Hillary Clinton’s former competitor standing up and providing a full-throated endorsement of her and saying his supporters should do the same. But the emotion in the Wells Fargo Center, site of the DNC, made it clear that some of his delegates were still struggling to get on board with Clinton.

Sanders addressed the crowd as the last speaker of the night and used all of the necessary key words from his own party platform: single-parent healthcare, free education, criminal justice reform and unification against the Republican party.

"Hillary Clinton will make an outstanding president and I am proud to stand with her tonight," Sanders said during his speech.

From the beginning of the evening, many Sanders supporters made it clear they planned to stand with the outspoken senator until the bitter end.

Dr. Cynthia Hale, the reverend who opened the DNC with a prayer, was interrupted numerous times by supporters chanting “Bernie.” During Maryland Rep. Elijah Cummings’ speech, the California delegation stood in unison holding anti-Trans Pacific Partnership signs. At several times during the afternoon, speakers had to stop and tell the crowd to be respectful. Sanders' campaign sent out text messages to registered supporters telling them not to protest.

The rest of the night proceeded with similar incidents. Speakers came and went, Sanders supporters held up their Bernie signs and musical acts played, but the question remained: How could the Democratic Party convince the former candidate’s supporters to switch from backing a self-described revolutionary socialist to voting for a career politician?

Sanders’ stage time was something the senator from Vermont had been aiming for since the beginning of the end of his drawn-out candidacy. Yet it seemed just as integral for the scandal-ridden Democratic Party, which needs desperately to appear united, especially after the email hack that led to Democratic National Committee chairwoman Debbie Wasserman Schultz’ resignation.

Earlier in the day thousands of Bernie Sanders supporters marched nearly three miles in support of their candidate. Some chanted, “"Hell No, DNC, we won't vote for Hillary,” while others took up the rally calls echoed at the RNC, singing “lock her up” and sporting “Hillary for Prison” t-shirts.

But when Sanders took the stage on Monday night, his supporters gave the candidate a loud ovation that lasted for several minutes. But despite the swell of support for Sanders in the room, a large share of the reactions were negative.

Robert Shearer, 33, a delegate from California, said that regardless of Sanders' endorsement of Clinton, he will never vote for the former secretary of state.

Conservatives have capitalized on that division. Donald Trump himself evoked Sanders in his convention speech last Friday saying, "We're going to get a lot of the Bernie voters by the way, because they didn't treat him right. He ran a very, very good campaign and Hillary's people just swamped him."

Sanders’ team reacted quickly on Twitter, writing: “Those who voted for me will not support Trump who has made bigotry and divisiveness the cornerstone of his campaign. #RNCwithBernie.”

While it may not be Trump that Sanders’ supporters vote for instead of Clinton, the former Secretary of State does risk losing many votes to third-party candidates such as the Green Party’s Jill Stein or the Libertarian Party’s Gary Johnson.

“I can definitely understand why they do that. When you talk to Hillary supporters they are mostly concerned with the candidate herself or the party, but Bernie supporters know it’s not about the man, it’s about the movement,” said Ryan Lopez, a 20-year-old California delegate. “It’s about the movement and the values that [Sanders] embodies. A lot of people feel like with the endorsement he caved in on his values—so they want to go to someone else who reflects their values.”

Nevertheless, many Sanders supporters understand that this is the end of the road for them.

"I'm not really a fan of Hillary but my end fear is a Trump presidency, so we need to unify. Bernie's speech reminded us of the issues, that we have the most Democratic party platform we've ever had and we have to unify around that idea," said Diego Sanchez, 26, of Miami, Florida.