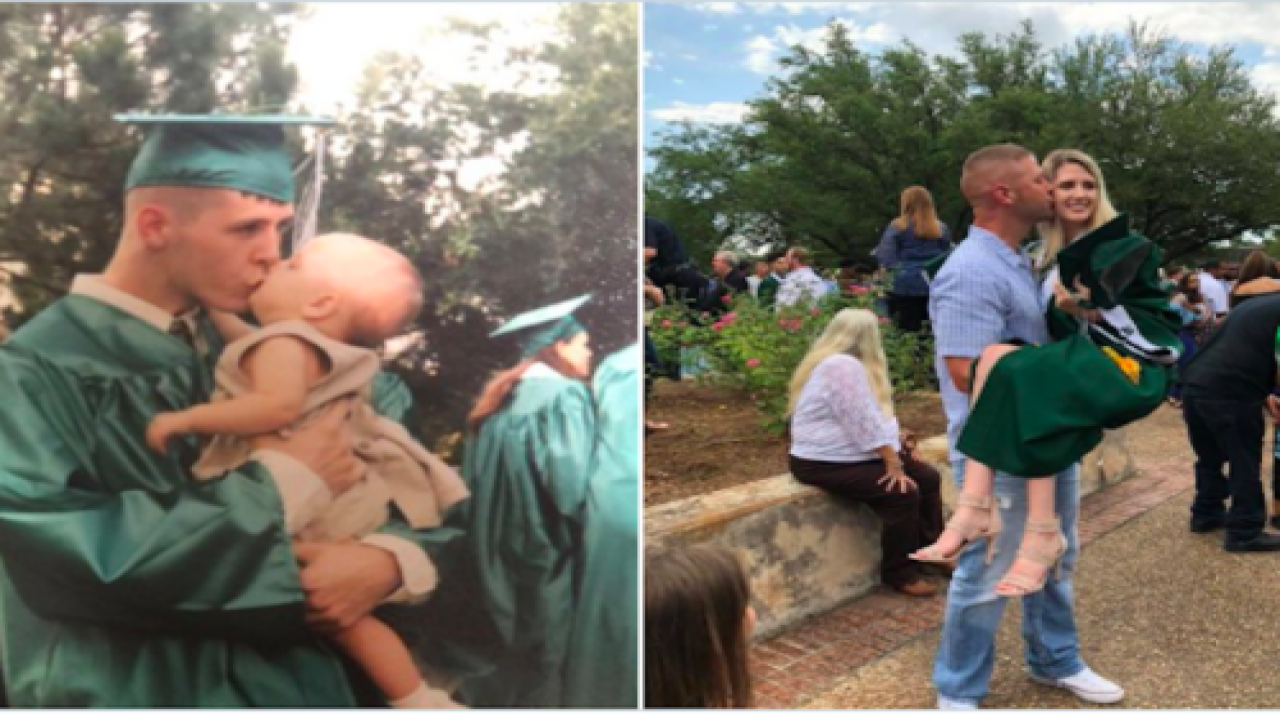 In May 2018, Tori Roach graduated high school. In honor of her accomplishment, she posted a special side-by-side photo display on Twitter.

On the left, there’s a photo of her as a baby in the arms of her dad, Dennis, on his high school graduation day 18 years prior.

On the right is a photo of her back in her dad’s arms, this time as an 18-year-old graduating senior herself.

The sweet tribute gained a lot of traction and was retweeted thousands of times.

A year later, the tweet is once again making the rounds as graduation season is in full swing throughout the country.

“18 years later,” Roach wrote along with a graduation cap and heart emoji. How cute!

People on Twitter thought their dad-daughter bond was so sweet.

This is simply great. Congratulations ðð¾ðð

“This is beautiful,” agreed @nnwigene:

Other people noticed how attractive Dennis was 18 years ago and still is today.

Twitter user @sidluvscats even asked if Roach was looking for a stepmom:

looking for a step mom?

However, Roach dashed the inquirer’s dreams by letting her know that her dad is married:

For everyone asking, yes this is my dad, he’s 37, and no he isn’t single…I have another sibling on the way ð

“For everyone asking, yes this is my dad, he’s 37, and no he isn’t single…I have another sibling on the way.”

When Roach realized how much attention her tweet had garnered, she couldn’t believe it.

“I woke up and I had a ton of notifications … People had started sharing and liking and commenting all over again,” she told People of her second round of viral fame.

“My dad was really proud,” she continued. “We’re from a small town, so nothing like this really ever happens. And he was like, ‘That’s so cool!'”

The Roaches are from Huntsville, Texas, and both dad and daughter are proud graduates of Huntsville High School.

Tori now attends Sam Houston State University in their hometown, and when she graduates college in 2022, she plans to re-create the epic photo with her dad once again.

What a great idea!

Everyone loves the opportunity to re-create old photos — including the royals! In June 2018, Prince William snapped a photo while traveling in Amman, Jordan, to re-create one of his wife’s childhood photos.

The Kensington Palace Twitter account tweeted the side-by-side images of Prince William in Jordan and the old photo of Kate Middleton as a child, posing in the same spot with her father and sister.

When Middleton was 2 years old, her family moved to Amman, and spent nearly three years there while her father was working for British Airways. The family then returned to Berkshire, England.

While re-creating photos with humans is endearing, some people pay homage to old iconic images in an even cuter way … by dressing up their pets!

The results are hilarious.

Good morning âï¸ Yesterday I thought I could thank you all personally for all the kind messages you left here and on Madonna’s IG but you are SO many… Just a quick note to tell you how it makes me feel good to read you and how you uplifted my day with all of your support. Thanks again for all of this and have a beautiful day! Vincent. #keepittogether