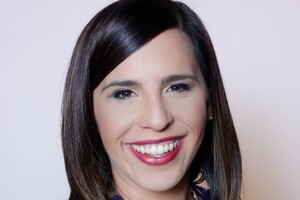 After 8 years of chasing her dreams across the country, this Michigan native couldn't be any more thrilled to be back in the mitten. Sarah Swistak is an award-winning journalist who signed on as the Evening Anchor of FOX 47 News in February of 2014.

Sarah has a penchant for asking questions and a love for telling quirky stories. She was recently named Best in Category for news reporting by the Michigan Association of Broadcasters, and was nominated for an Emmy for her work on #SWISStrong, a monthly cancer series she started in honor of her late brother, Steve, who passed away from esophageal cancer.

Her news writing and feature stories have also been recognized by the Michigan Association of Broadcasters, Associated Press in Minnesota and Montana, the Society of Professional Journalists, and the Northwest Broadcast News Association. Sarah has been honored with three consecutive Emmy nominations for her work as the anchor, producer and editor of ABC 6 News Weekend, and received a fourth nomination for her coverage of Hurricane Sandy in Pennsylvania. During her time in Minnesota, she was also named one of the state's Best Young Journalists, across all mediums, two years in a row.

From flying high in a B-17 Bomber with a group of World War II Veterans to climbing inside of the "Globe of Death" as motorcycles whizzed around her, to rappelling down the side of a building, Sarah seizes every opportunity that comes her way. She made her debut on national television (MSNBC) in December of 2007, through a series of live reports on Evel Knievel's funeral, and just two months later, she appeared on Nightly News with Brian Williams for her coverage of Super Tuesday.

Sarah is a proud alum of Michigan State University (GO GREEN!). She graduated with a degree in Journalism and American Sign Language, and was one of only six people in her graduating class to have a perfect 4.0 GPA.

When she's not hard at work, chances are she's spending time with her beloved rescue pup, Riley, or doing something crafty.

If you have a story idea, or would just like to say hello, she'd love to hear from you.